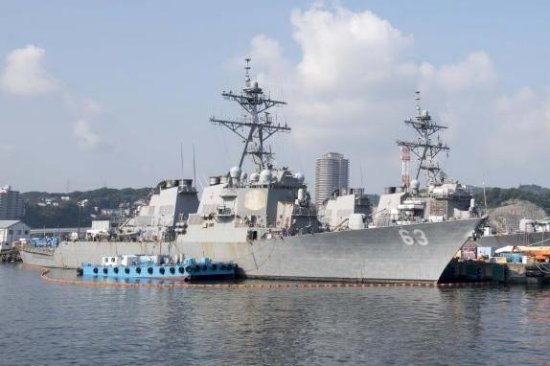 The USS Stethem, a U.S. Navy destroyer, sailed Sunday within 12 miles of a disputed island in the South China Sea claimed by China, a U.S. official said.

The Sethem approached the Triton Island in the 30-island Paracel archipelago, which are also claimed by Vietnam and Taiwan. The Paracel Islands are known as the Xisha Islands in China and the Hoang Sa Archipelago in Vietnam.

The standard international boundary extending offshore from all nations is 12 nautical miles.

The United States does not recognize Beijing’s claim of sovereignty over the islands.

Lt. Cmdr. Matt Knight, a spokesman for the U.S. Pacific Fleet, told CNN the Navy conducted a “freedom of navigation exercise” around the island as a routine part of U.S. Navy operations.

Knight said it was an innocent passage, which generally allows for a ship to pass through the territorial waters of another country.

“The United States will fly, sail and operate wherever international law allows,” he told USA Today. He added the exercises “are not about any one country, nor are they about making political statements.”

The Chinese Ministry of Foreign Affairs said in a statement the U.S. “trespassed” and it sent “military vessels and fighter planes in response to warn off the US vessel.”

China called the action “a serious political and military provocation.”

On May 24, the guided-missile destroyer USS Dewey sailed within 12 miles of Mischief Reef in the Spratly Islands chain, which lies to the south of the Paracels.

The Asia Maritime Transparency Initiative, said in a report Thursday China is continuing to build up infrastructure on three islands in the Spratly chain: Fiery Cross, Mischief and Subi reefs.

The initiative, which is part of Washington-based Center for Strategic and International Studies, said that recent satellite imagery shows China “remains committed to developing its power projection capabilities.”

Adm. Harry Harris, the top U.S. military commander in the Pacific, said in a speech last week in Australia that Beijing was using “fake islands” to build up a military and strategic advantage.

“China is altering physical and political landscapes by creating and militarizing man-made bases,” Harris said. “Fake islands should not be believed by real people.”

In April, the Navy announced the Stethem, an Arleigh Burke-class, guided-missile destroyer, was conducting routine operations in the South China Sea.

“Conducting these types of operations with our allies builds proficiency and sustains our ability to maintain a persistent presence throughout the 7th Fleet area of operations,” Command Senior Chief William Palmer IV said at the time.

During operations, Stethem has regularly communicated with naval vessels from the People’s Republic of China, the U.S. Navy said.

The ship, commissioned in 1995, is named after Steelworker Second Class Robert Dean Stethem, who was killed by Hezbollah terrorists during the hijacking of the commercial airliner he was aboard, TWA Flight 847, in 1985.

The 505-foot-long ship has 26 officers and 315 enlisted crew members, according to a ship fact sheet.