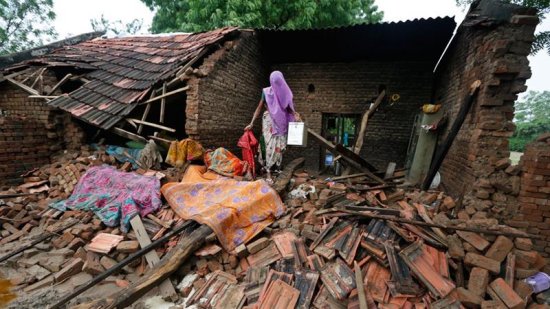 More than 16 million people have been affected by monsoon flooding across the South Asian countries of India, Nepal, and Bangladesh – putting huge numbers at risk of disease, hunger, and death.

One-third of Bangladesh and Nepal have been flooded, said Martin Faller, deputy regional director for Asia Pacific at the International Federation of Red Cross and Red Crescent Societies.

“This is fast becoming one of the most serious humanitarian crises this region has seen in many years and urgent action is needed to meet the growing needs of millions of people affected by these devastating floods,” Faller said.

According to officials, more than 400 people have died in the three countries over the last seven days, with India accounting for 239 fatalities, 128 dying in Nepal, and 39 in Bangladesh.

Flood levels had already reached record highs in Bangladesh. Flooding of major rivers such as the Jamuna surpassed levels from 1988, the year of the deadliest floods the country has ever faced, the humanitarian agency said.

“More than one-third of Bangladesh and Nepal have been flooded and we fear the humanitarian crisis will get worse in the days and weeks ahead,” Faller said.

“The sheer volume of water is also making it really difficult to access some of the communities most in need,” he said in a statement.

In Nepal, many areas remain cut off after the most destructive floods and landslides in recent times on August 11-12. Villagers and communities are without food, water, and electricity.

In India, 168 deaths were reported in Bihar and Assam states, the worst-hit by the floods. Officials said the situation remains grim with the weather bureau forecasting more heavy rain in the region over the coming days.

In a makeshift relief camp in India’s Kaliabor, 160km east of Guwahati city, families said they had not received any aid.

“We are practically starving with no government supplies reaching us,” said Arunima Dutta, a mother of three, who is sheltering from the disaster with hundreds of others.