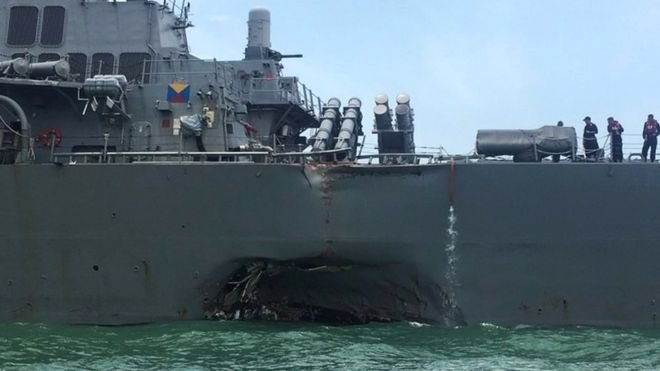 Ten US Navy sailors are missing and five have been injured after a US destroyer and an oil tanker collided near Singapore, the Navy says.

The guided missile destroyer USS John S McCain was sailing east of Singapore and preparing to stop in the port when the collision with the Liberian-flagged vessel occurred.

A wide-ranging search and rescue operation is under way.

It is the second collision involving a US Navy ship in recent months.

It was reported before dawn at 05:24 local time on Monday (21:24 GMT on Sunday) and took place east of the Strait of Singapore, as the USS John S McCain prepared to perform a routine port stop in Singapore.

Singapore and US authorities said the destroyer sustained damage to her port side, which is the left-hand side of the vessel facing forward.

The tanker it collided with, Alnic MC, sustained damage to a tank near the front of the ship 7m (23ft) above the waterline, but none of its crew were injured and there were no oil spills.

This is thought to be the fourth time in a year that a US navy vessel has been involved in an accident.

Just two months ago, seven US sailors were killed when the USS Fitzgerald collided with a container ship in Japanese waters near the port city of Yokosuka.