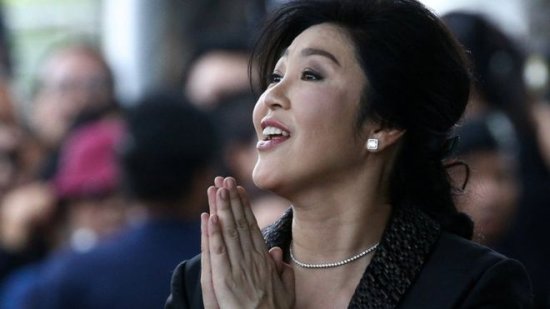 Former Thai PM Yingluck Shinawatra has fled abroad, sources say, ahead of a verdict in her trial over a rice subsidy scheme.

Sources in her party say she made the decision to leave unexpectedly, shortly before she was due to appear at the Supreme Court on negligence charges.

Her lawyers told the court she had been unable to attend because she was ill.

But when she failed to appear, the court issued an arrest warrant for her and confiscated her bail.

Ms Yingluck has denied any wrongdoing in the scheme which cost Thailand billions of dollars. If found guilty at the end of her two-year trial, she could be jailed for up to 10 years and permanently banned from politics.

Sources within Ms Yingluck’s Puea Thai Party told Reuters that she had “definitely left Thailand” but did not give details of her whereabouts.

Earlier, Prime Minister Prayuth Chan-ocha said all routes out of the country were being closely monitored.

“I just learned that she did not show up [at court],” he told reporters. “I have ordered border checkpoints to be stepped up.”

Deputy PM Prawit Wongsuwan initially said he had no information on Ms Yingluck’s whereabouts but as he left a meeting in Bangkok he said: “It is possible that she has fled already.”

Ms Yingluck’s lawyer had requested a delay in the ruling, telling the Supreme Court that she had vertigo and a severe headache and was unable to attend.

But the court said in a statement it did not believe she was sick as there was no medical certificate and that the claimed sickness was not severe enough that she could not travel to court.

“Such behaviour convincingly shows that she is a flight risk. As a result, the court has issued an arrest warrant and confiscated the posted bail money,” the statement said.

In another development, a former Thai minister also charged in connection with the rice subsidy scheme was jailed for 42 years on Friday.

Boonsong Teriyapirom was found guilty of falsifying rice deals between Thailand and China.