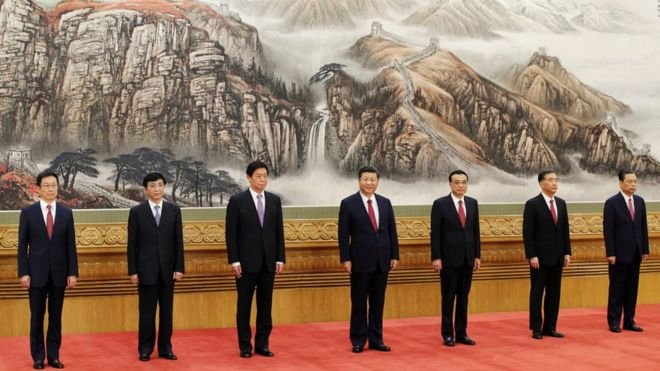 China has revealed its new senior leadership committee, breaking with tradition by not including a clear successor to President Xi Jinping.

The omission cements Mr Xi’s grip on China for the next five years and possibly beyond, a day after his name was written into the constitution.

Five new appointments were made to the seven-member Politburo Standing Committee, China’s most powerful body.

The absence of an heir raises questions over how long Mr Xi intends to rule.

Apart from 64-year-old Mr Xi, premier Li Keqiang, 62, was the only committee member to retain his position.

Chinese leaders have in recent decades hinted at one or more possible heirs to the Standing Committee at the beginning of their final term, indicating a clear line of succession.

There had been speculation that Mr Xi would elevate his protégé Chen Miner and Guangdong party secretary Hu Chunhua, both of whom are in their 50s – young enough to be credible successors.

But the six dark-suited men who walked out on stage on Wednesday were all in their 60s and are all likely to retire at the end of this five-year term.

The absence of any younger members will fuel speculation about Mr Xi’s long-term intentions and his eventual successor.

There had been rumours that Mr Xi would reduce the size of the Standing Committee from seven to five, further tightening his control, but they proved unfounded.

Several international news organisations, including the BBC, Financial Times and The New York Times were denied access to the announcement, at Beijing’s Great Hall of the People.

The Foreign Correspondent’s Club of China said in a statement it was “gross violation of the principles of press freedom”.

The apparent absence of potential successors in the Standing Committee consolidates power with Mr Xi for the next five years, and points to a continued role for him after 2022.

The party voted on Tuesday to enshrine Mr Xi’s name and ideology into its constitution, elevating him to the level of the party’s founding father, Mao Zedong.

The unanimous vote by delegates to incorporate “Xi Jinping Thought” into the constitution significantly strengthens Mr Xi’s political control of the country, making him essentially unassailable. It is also likely to ensure him continued power and influence long after his eventual retirement.

Elected president in 2012, Mr Xi began his second five-year term as of this year’s congress.

In recent history, Chinese leaders have served 10-year terms, but Mr Xi could technically stay on after 2022 as party chief and head of the military, allowing him to wield influence over the country’s leadership beyond the end of his presidency.

Related Topics:AsiaChinaXi Jinping
Up Next