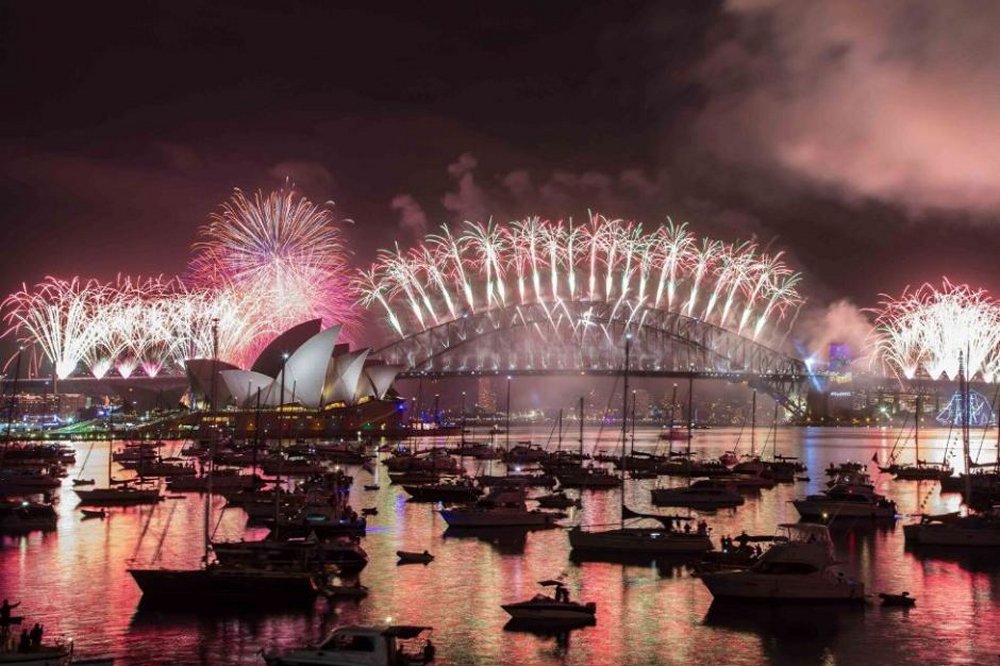 Millions of people across Australia have partied into the New Year, after farewelling 2016 beneath night skies set ablaze with colour by stunning fireworks displays.

More than 1 million people flocked to the shores of Sydney’s harbour foreshore to celebrate the first moments of 2017 and watch the city’s famed fireworks displays, which paid tribute to some of the musical legends who died in 2016.

The early event, an eight-minute pyrotechnic display filled with flaming starbursts and firecrackers, saw purple fireworks rain down from the Sydney Harbour Bridge to honour the late artist Prince.

At midnight crowds were thrilled by a 12-minute display that lit up the iconic bridge and Opera House, and included Saturn, moon and star-shaped fireworks in what organisers said was a nod to David Bowie’s classic Space Oddity.

The two displays comprised an estimated seven tonnes of fireworks, including 12,000 shells, 25,000 shooting comets and 100,000 individual pyrotechnic effects — the biggest show the city has ever seen.

“The fireworks were absolutely beautiful today and tonight is just a good atmosphere and it has just blown my mind away,” said Mitchell McCallum, 10.

In addition to the crowd lining the foreshore, around 2,000 boats filled the harbour to get a water view of the spectacular.

Large crowds gathered at key vantage points across the city to get the best view of the skyline, and there were screams of enjoyment as fireworks were let off from the tops of 22 buildings.

An estimated 13.5 tonnes of fireworks went off, covering an area of eight square kilometres — a record for the city.

Extra police were deployed in the city, after an alleged terrorism plot targeting Melbourne landmarks on Christmas Day was foiled.

Revellers in Brisbane turned out early to stake their claim along the river in South Bank, and were rewarded with two sets of stunning fireworks.

In Adelaide, tens of thousands of people flooded Elder Park, while masses of people also took to the coast at Semaphore, Glenelg and Brighton.

Tens of thousands more celebrated the end of 2016 at the Adelaide Oval with the Big Bash League clash between the Adelaide Strikers and the Sydney Sixes.

Canberra revellers enjoyed a dance party at Garema Place, while thousands in Hobart welcomed the New Year at the city’s waterfront.

Many found a spot at the River Derwent’s edge to get a view of the midnight fireworks on the water.