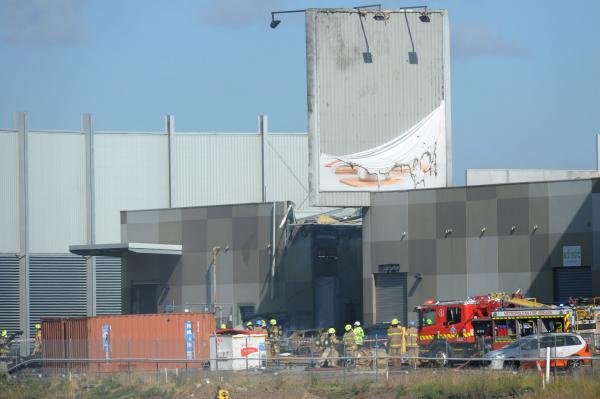 A small plane crashed into a shopping mall in Australia on Monday afternoon, killing five people on board, four of whom were U.S. citizens, the State Department said.

Emergency officials in Melbourne said engine failure brought down the Beechcraft King Air plane, which witnesses said caused a fireball to rise from the Direct Factor Outlets Center, near Essendon Airport. Both the mall and airport were closed as officials conducted an investigation.

“At this stage, the advice we have is that there are no fatalities other than on the aircraft itself,” said Craig Lapsley, Victorian Fire Services Commissioner.

Aside from some staff, the mall was empty and not yet open, officials said.

Witnesses said the plane appeared to be coming in low and fast before they saw an explosion at the mall. The plane hit the back of the mall, sending parts of the aircraft as far as the Tullamarine Freeway, on the opposite side of the shopping center.

“[I thought] what the hell? That doesn’t happen every day,” said Michael Henry, who saw the crash. “It was crazy, like something from a movie.”

The plane was piloted by its owner, Max Quartermain, who had four U.S. citizens on the flight heading to King Island in the Bass Strait off the southern coast of Australia. The U.S. citizens were not identified because officials were in the process of contacting their families.

“We extend our deepest condolences to the families and loved ones of all those who died in today’s tragic crash,” a U.S. State Department official told NBC News. “The U.S. Embassy and Consulate in Melbourne are working closely with local authorities. We stand ready to provide all appropriate consular assistance to the families of the victims.”

Toddler burnt by dad as she was ‘too beautiful’