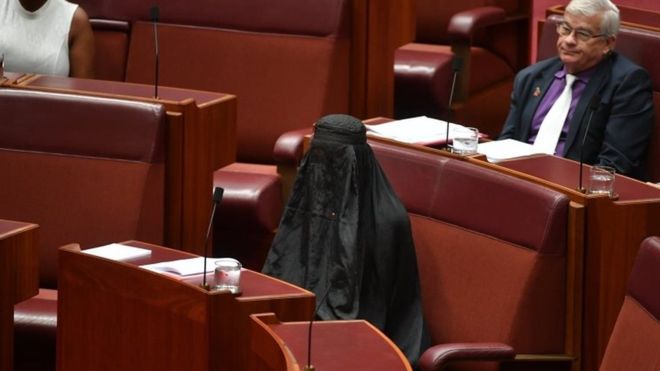 The leader of Australia’s far-right One Nation party has worn a burka on the floor of the nation’s Senate.

Pauline Hanson’s entrance drew audible shock from other senators ahead of a bid by her party to ban the garment in Australia.

“To ridicule that community, to drive it into a corner, to mock its religious garments, is an appalling thing to do and I would ask you reflect on what you have done,” said Ms Brandis, who is Australia’s attorney-general.

He added: “No, Senator Hanson, we will not ban the burka.”

The Australian Broadcasting Corp reported Ms Hanson had elicited gasps during her entrance and one senator was heard to to say “oh, what on earth”.

Senate president Stephen Parry confirmed she had been identified before entering the chamber. Ms Hanson later removed the burka.

Her motion to ban the garment will be debated in the Senate later on Thursday.

In a statement online, she said “the need to ban full face coverings in public [is] an important issue facing modern Australia”.

Mr Brandis’s speech drew a rare overt display of support from the Labor and Greens parties, who stood and congratulated him.

“It is one thing to wear religious dress as a sincere act of faith, there is another to wear it as a stunt here in the chamber,” said Labor Senator Penny Wong.

Ms Hanson has repeatedly generated controversy since first being elected to parliament in 1996.

In 2016, she gave a heavily criticised speech saying Australia was being “swamped by Muslims”. She also faced calls to apologise two months ago after suggesting students with autism should be removed from classrooms.