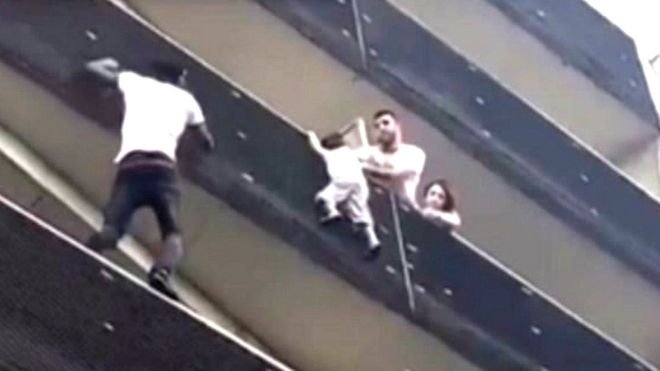 A Malian migrant has been hailed a hero after he scaled the front of a building in Paris to save a small boy hanging from a fourth-floor balcony.

In less than a minute he pulled himself from balcony to balcony and grabbed the four-year-old as a neighbour tried to hold the child from an adjoining flat.

President Emmanuel Macron has invited Mr Gassama to the Elysee Palace on Monday to thank him personally.

The drama was captured in a video posted on Facebook.

It unfolded on Saturday evening on a street in the north of the city.

Mr Gassama said he had been walking past when he saw a crowd gathered in front of the building.

He told French broadcaster BFMTV when he saw the child dangling from the balcony, “I did not think, I saved him.”

“When I took him in my arms, I spoke with him and asked: ‘Why did you do that?’ But he did not answer.”

The Parisian fire service said crews had arrived to find the boy had already been rescued.

“Luckily, there was someone who was physically fit and who had the courage to go and get the child,” a spokesman told AFP news agency.

Local authorities quoted by French media said the boy’s parents were not at home at the time.

The father has been questioned by police on suspicion of leaving his child unattended, judicial sources say. The mother was not in Paris at the time, it is believed.

Spiderman of the 18th

Paris Mayor Anne Hidalgo praised the 22-year-old’s heroism and said she had called him to thank him.

She referred to him as the “Spiderman of the 18th”, referring to the Paris district where the rescue took place.

“Congratulations to Mamoudou Gassama for his act of bravery that saved the life of a child,” Ms Hidalgo tweeted.

“He explained to me that he had arrived from Mali a few months ago dreaming of building his life here.

“I replied that his heroic gesture was an example for all citizens and that the City of Paris will obviously be keen to support him in his efforts to settle in France.”