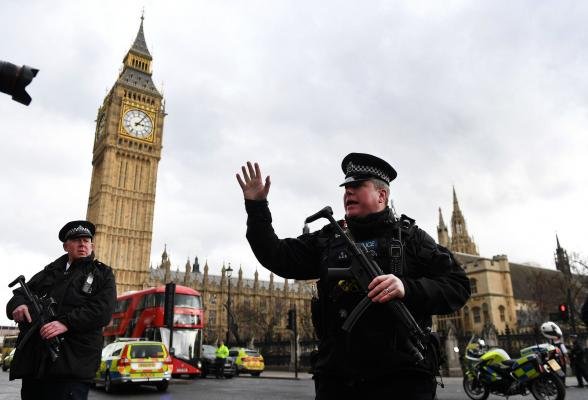 Two people, including a police officer, died Wednesday in what London police say they are treating as a “terrorist incident” near the Houses of Parliament.

Authorities placed the legislative building and surrounding area, including Westminster Bridge, on lockdown after witnesses reported hearing reports of gunshots around 2:40 p.m. Those areas were later evacuated.

Leader of the House of Commons David Lidington said a police officer was fatally stabbed in the incident and an assailant was shot, BBC reported.

The Guardian reported up to 12 people may have been injured when a vehicle drove into a crowd on Westminster Bridge, which is near the Houses of Parliament.

One woman who was on the bridge died.

London Metropolitan Police Cmdr. B.J. Harrington told reporters there are a “number of casualties, including police officers,” but he was unprepared to give a specific number or comment on the severity of injuries.

“Officers — including firearms officers — remain on the scene and we are treating this as a terrorist incident until we know otherwise,” Metropolitan Police said in a statement.

He said Craig Mackey, the acting commissioner of the Metropolitan Police, was at the scene of the incident and is being considered a “significant witness.”

Within minutes of shots being fired, eight armed undercovered police rushed British Prime Minister from Parliament to a waiting vehicle.

Related Topics:David LidingtonEuropeLondon attack at Parliament
Up Next