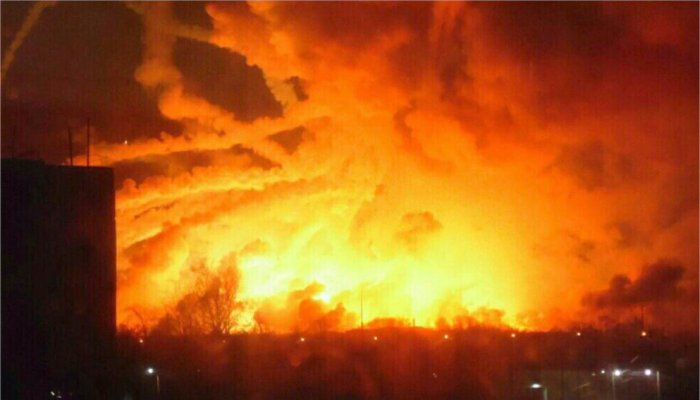 The Ukrainian military said unknown saboteurs blew up a warehouse storing tank ammunition at a military base in the east of the country early Thursday. The massive fire prompted the evacuation of about 20,000 people.

The base, which contained about 138,000 tons of ammunition, is in the city of Balakleya about 100 kilometers (60 miles) from the frontline of Ukraine’s war against Russian-backed separatists.

Ukraine’s chief military prosecutor, Anatoly Matios, said on Facebook that the blaze, which erupted early Thursday at the depot in Balaklia, was sparked by the sabotage.

He said there was no immediate information about any casualties.

The arsenal holds large-caliber artillery rounds and is one of Ukraine’s largest.

“According to preliminary data … as a result of sabotage, last night at 2.46 AM (0046 GMT), fire and explosions caused the detonation of ammunition at several sites storing rockets and artillery weapons,” Ukraine’s chief military prosecutor Anatoly Matios wrote on Facebook.

Military spokesman Oleksander Motuzyanyk said security around other bases was being beefed up. Ukrainian Prime Minister Volodymyr Groysman has flown to the area to monitor the blaze, which is still raging.

Kharkiv lies just north of the Donetsk and Luhansk regions, where Ukrainian troops have been fighting Russia-backed separatists. The conflict has killed more than 9,800 since April 2014.

Saboteurs tried to destroy the same base using drones in 2015, another military spokesman, Yuzef Venskovich, told the 112 TV channel.

More than 10,000 people have been killed in the conflict between Ukraine and the separatist rebels since 2014.