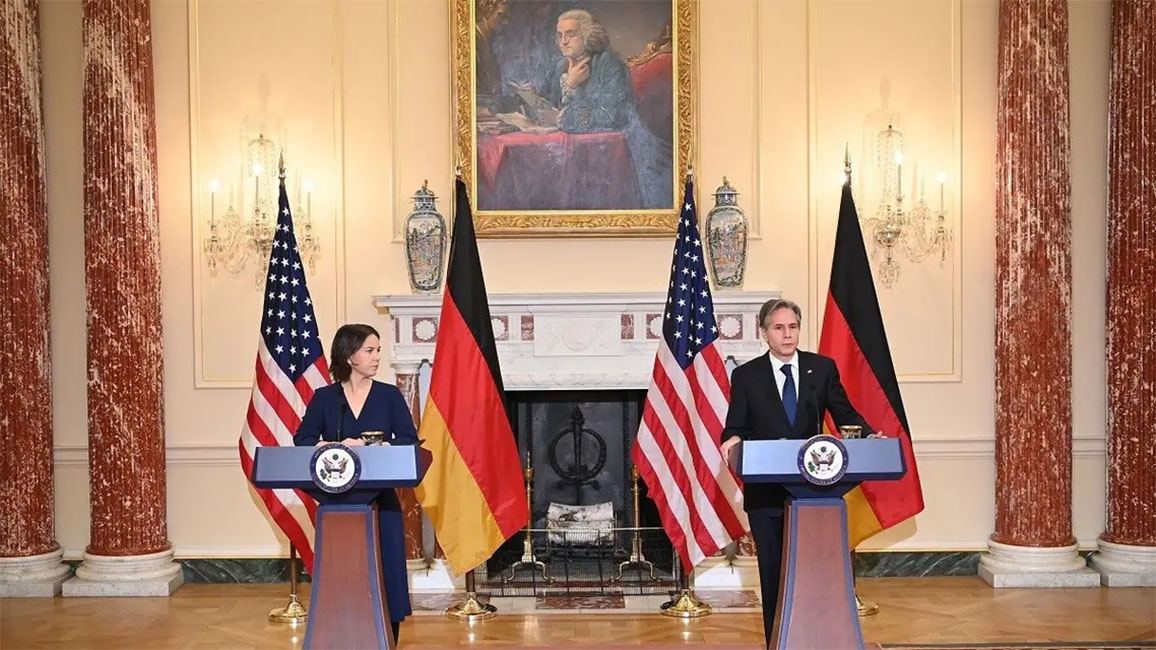 The United States and Germany’s top diplomats on Wednesday reiterated that they would impose consequences on Russia for an invasion of Ukraine, with German Foreign Minister Annalena Baerbock stressing the need for a diplomatic solution to heightened tensions between Moscow and the West.

US Secretary of State Antony Blinken and his newly installed German counterpart met at the State Department ahead of a series of meetings with Russian officials in Europe next week.

Alarmed by Russia’s military buildup along Ukraine’s border, Washington has rallied European allies to threaten Russia with sanctions to try to de-escalate the tensions.

“Strong trans-Atlantic solidarity is the most effective response and most effective tool that we have in countering Russian aggression,” Blinken said, repeating a pledge to go further than any previous sanctions against Russia and “inflict very significant costs on Russia’s economy and financial system” in the event Russia invades Ukraine.

Baerbock said Russia was aware it was the “common position” of Europe and the United States to impose “severe consequences” in the event of an invasion, but did not specify what sanctions action Germany would take.

“There is no alternative to a political solution. This has to be clear to the Russian government,” Baerbock said, according to a live interpretation of her comments following her meeting with Blinken.

Ukraine accuses Russia of massing around 100,000 troops in preparation for a possible invasion, raising fears that a simmering conflict in Ukraine’s eastern Donbass region could erupt into open war between the neighboring former Soviet republics.

US President Joe Biden has promised to continue providing military aid to Ukraine to defend itself against potential Russian aggression.

Baerbock said Germany had a “different position” to the United States on the supply of arms to Ukraine, but was supporting Ukraine’s armed forces through medical supplies and helping in the treatment of Ukrainian soldiers wounded in the conflict.

Baerbock said the new coalition government that took power in Berlin last month supported a joint statement signed with Washington by its predecessors in July.

Strong Magnitude 6.4 Earthquake Strikes off the coast of Cyprus