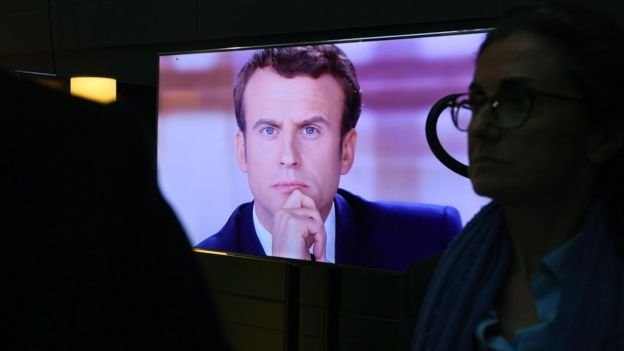 French pundits, newspapers and a highly regarded viewers’ poll all declared the centrist candidate the most convincing.

The candidates traded insults for more than two hours, arguing over terrorism, the economy, and Europe.

The second round run-off between the pair takes place on Sunday.

Both candidates were hoping to make an impression on the estimated 18% of undecided voters in the first election the country has ever held without a candidate from the two traditional mainstream parties.

The French broadcaster BFMTV found viewers had a more favourable view of Mr Macron than Ms Le Pen in most categories.

He was the “most convincing” of the pair in the opinion of 63% of those interviewed.

The issues – and the insults

Mr Macron enjoys a healthy lead in the opinion polls. But during the key debate, Ms Le Pen lambasted him on his record as economy minister in the Socialist government – a post he quit to form his En Marche! movement.

The National Front candidate accused him of being “the candidate of savage globalisation” and said his version of France “is a trading room, where it will be everyone fighting for themselves”.

In turn, Mr Macron said Ms Le Pen had openly lied, proposed nothing, and exaggerated the concerns of the public.

“The high priestess of fear is sitting before me,” he said.

On unemployment, which stands at around 10% nationally, Mr Macron acknowledged that the country had not tackled the problem – and Ms Le Pen asked why he had not handled it during his recent time as economy minister.

She also accused him of complacency about the threat of radical Islamist terrorism. “Security and terrorism are major issues that are completely missing from your programme,” she said.

But in response, Mr Macron said the measures she proposed – “eradicating” Islamic fundamentalism by shutting down extremist mosques, and expelling preachers of hate – were “snake oil” that played into terrorists’ hands and the desire they had for a “civil war”.

They also clashed on the future of the European Union – another issue where they are clearly opposed.

Ms Le Pen has said she would call for an in-out referendum on EU membership, and in recent days declared the euro currency finished.

During the debate, she said she would restore France’s national currency and give companies and banks an option on which currency to pay in – a proposal which Mr Macron labelled “nonsense”.

The BFMTV poll was carried out among 1,314 people over the age of 18 who watched the television debate.

Mr Macron also led among voters when they were asked about which candidate was most honest, most aligned with the voters’ values, and had the best plans.

Wednesday night’s debate marked the last time the two candidates faced each other before Sunday’s vote.

Just two days of campaigning remain before reporting restrictions come into force late on Friday evening – and remain in place until polls close on Sunday.

Prince Philip to step down from royal duties