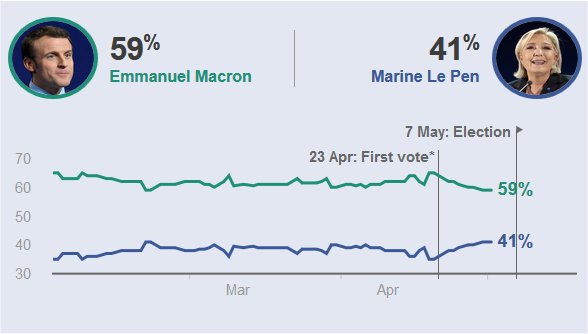 The frontrunner in the race for the French presidency, Emmanuel Macron, has filed a lawsuit over online rumours that he has a secret bank account in the Caribbean.

Prosecutors in Paris have opened an investigation following his complaint.

The news came after the centrist, pro-EU candidate was regarded as having come out on top in the final TV debate ahead of Sunday’s run-off vote.

His far-right adversary, Marine Le Pen, referred to the claims in the debate.

He replied: “That is defamation.”

On Thursday, an aide to Mr Macron told AFP news agency: “We will not hesitate to prosecute for defamation anyone who repeats this false information.”

The prosecutors’ investigation sends a clear message that anyone repeating the allegation can expect to be taken to court, the BBC’s Hugh Schofield in Paris says.

The allegations about a secret bank account spread online on right-wing websites and on social media.

Speaking on French radio on Thursday, Mr Macron called the allegations “fake news and lies” and said some of the sites spreading them were “linked to Russian interests”.

His supporters say some of the sites have supported US President Donald Trump.

In other developments on Thursday:

How she brought the claims up and how he replied

Le Pen: “I hope we won’t find out that you have an offshore account in the Bahamas. I hope so…”

Macron: “But what about you? We all know about your undervalued assets and we all know that you’re currently under legal action – that’s not my situation, that’s yours.”

He was referring to alleged fraudulent payments from the European Parliament to the FN’s party staff. The FN denies allegations that it took payments for staff who were not really working for MEPs, and Ms Le Pen says she is the victim of a politically-motivated vendetta.

What else came up in the debate?

Mr Macron and Ms Le Pen argued for two hours in the hope of winning over voters.

She lambasted him on his record as economy minister in the Socialist government – a post he quit to form his En Marche! movement – and accused him of being “the candidate of savage globalisation”.

In turn, Mr Macron said Ms Le Pen had openly lied, proposed nothing and exaggerated the concerns of the public.

Ms Le Pen accused him of complacency about the threat of radical Islamist terrorism.

In response, Mr Macron said the measures she proposed – “eradicating” Islamic fundamentalism by shutting down extremist mosques, and expelling preachers of hate – were “snake oil” that played into terrorists’ hands and the desire they had for a “civil war”.

What was the viewers’ verdict?

Both candidates were hoping to make an impression on the estimated 17% of undecided voters in the first election the country has ever held without a candidate from the two traditional mainstream parties.

BFMTV carried a poll suggesting viewers of the debate had a more favourable view of Mr Macron than Ms Le Pen in most categories.

He was the “most convincing” of the pair in the opinion of 63% of those interviewed.

Mr Macron also led among voters when they were asked about which candidate was most honest, was most aligned with the voters’ values and had the best plans.

The BFMTV poll was carried out among 1,314 people over the age of 18 who had watched the television debate.

How has the French press reacted?

French newspapers were taken aback by the open hostility on display during Wednesday night’s debate.

Le Figaro saw Ms Le Pen adopt a “strategy of total war that consisted of bombarding her opponent without respite”. Mr Macron, it says, “dominated his opponent on economic issues” during a debate of “unprecedented brutality”.

Liberation accuses Ms Le Pen of “drowning the debate in an avalanche of disinformation” and publishes a list of what it says are false or exaggerated statements made by her.

Le Monde also firmly comes down on the side of Mr Macron, who it says “repeatedly denounced the ‘nonsense’ by the candidate of the National Front – often rightly”.

Les Echos takes issue with the aggressive tone of the debate, saying the candidates “spent more time attacking each other” than explaining future reforms.