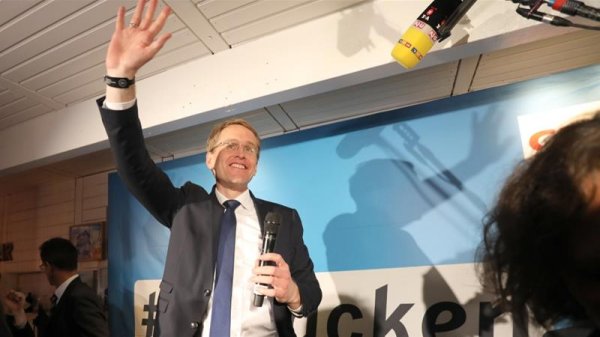 Merkel’s Christian Democrats (CDU) won 32.0 percent of the vote in the strongly Protestant state of Schleswig-Holstein, according to preliminary results released early on Monday.

The Social Democrats (SPD) – which was governing the state in a coalition with the Greens and SSW, a regional party that represents the Danish and Frisian minorities – won just 27.2 percent of the vote.

Schleswig-Holstein’s CDU candidate Daniel Guenther, speaking after projected results were first announced, said that voters had made a clear decision against the incumbent state government, which he referred to as “the coalition of stagnation”.

Voter participation on Sunday was at 64.2 percent, up four percentage points from the state’s last elections in 2012.

The result is disappointing for the SPD, whose popular new leader Martin Schulz – the former head of the EU parliament – was expected to bolster the party ahead of the September 24 general polls.

Schulz said he was “hellishly angry” about losing to the CDU.

“This is really something that gets under the skin and makes us unhappy,” he said. “We had all expected a better result.”

The so-called “Schulz effect” failed its first electoral test in March in the small industrial state of Saarland in the south-west, and failed to grant the SPD in Schleswig-Holstein enough votes to continue its current coalition.

Despite the CDU win, it is unclear which of the two main parties will be able to form a viable coalition and with whom.

The Greens obtained 12.9 percent of the vote, while the Free Democrats (FDP) – the CDU’s traditional preferred coalition partner – won 11.5 percent.

The country’s Left Party, with only 3.8 percent of the vote, will not be present in the new Schleswig-Holstein state parliament. The Pirate Party also loses its presence there, gaining just 1.2 percent in Sunday’s poll, after claiming 8.2 percent five years earlier.

The far-right Alternative for Germany (AfD) party picked up 5.9 percent of the vote, meaning it will enter the state’s legislature for the first time as it has passed the five percent threshold.

Once it does, the anti-immigrant party will sit in 12 of Germany’s 16 state parliaments.

AfD leader Joerg Meuthen welcomed the result and said the party would do even better in state polls in North Rhine Westphalia next week and in the national election in September.

Originally founded as an anti-euro party in 2013, the AfD is expected to enter the national parliament for the first time after September’s election, but is treated as a pariah by established political parties, which refuse to work with it.

This year, 16-year-olds could also vote in Schleswig-Holstein’s elections. Among the main issues during the campaign were education, infrastructure and the development of wind energy.