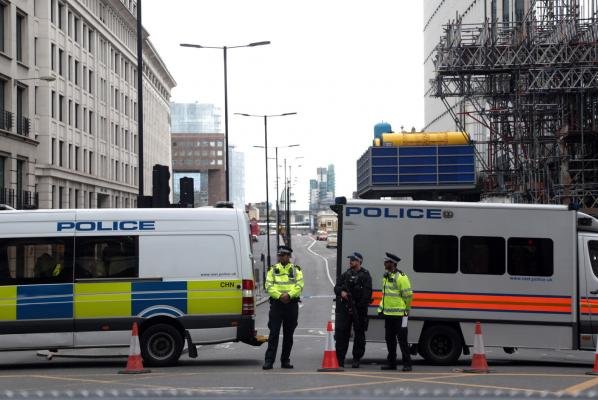 London police said they made 12 arrests Sunday in connection with an attack the previous evening that left seven victims and three suspects dead.

Law enforcement raided a block of flats in east London around 7 a.m. Sunday — about nine hours after three masked men drove a white van into pedestrians on the London Bridge, then leaped out and stabbed several people at Borough Market’s nearby bars and restaurants.

During the raid, one resident said police showed him a photo of one of the slain terror attackers. The witness, Damien Pettit, said he “looked a lot” like his neighbor.

The witness said the person he knew had children. “I am kind of absorbing this at the moment because I can’t understand how it could have been him,” he told Sky News. “He has always tried to help in terms of what is going on in the area.

“He always sets up community groups in terms of the homelessness that is happening here, so to hear that he is now complicit with this, it is very hard to stomach,” Pettit said.

Veronica Oladapo, 45, who lives nearby, told the Evening Independent she saw police taking four men and a woman away.

She said she heard shots fired, and an ambulance took some people away.

Assistant Commissioner Mark Rowley said Sunday afternoon that eight officers fired 50 shots at the attackers Saturday, a measure he described as “unprecedented.” He said the attackers appeared to be wearing suicide belts, but the devices were later proven to be fake. One of the shots reportedly struck a member of the public, who is recovering from the injury at a local hospital.

British Prime Minister Theresa May spoke Sunday at 10 Downing Street, describing the latest attack as “brutal.” The attack lasted eight minutes and the three known suspects were shot dead at the scene.

“We cannot and must not pretend that things can continue as they are,” she said.

She also said progress had been made but there remained “far too much tolerance of extremism in our country.”

May said: “Since the emergence of the threat from Islamist-inspired terrorism, our country has made significant progress in disrupting plots and protecting the public. But it is time to say `Enough is enough.'”

Sue said the recent attacks in Westminster, Manchester and London Bridge were unconnected, but warned that they were bound together by the “single evil ideology of Islamist extremism.”

The prime minister said Britain’s counter-terrorism strategy will be reviewed, and she warned that the Internet should no longer remain a “safe space” for extremists.

Hours earlier the terrorist group’s propaganda outlet asked would-be jihadists to carry out vehicle and knife attacks. The message sent out on an encrypted messaging app urged attackers to “gain benefit from Ramadan” and “kill the civilians of the Crusaders. Run over them by vehicles”.

Metropolitan Police Commissioner Cressia Dick urged people in London to remain vigilant but said police believe they have the incident “under control.”

The London Ambulance Service said at least 48 people were taken to five hospitals and others were treated at the scene. One French national was killed and four others injured, while one Canadian national was killed, according to their governments. The injured also included at least one Australian.

Geoff Ho, a business editor with the Sunday Express, is in intensive care after being stabbed in the throat when he tried to help a wounded bouncer during the attack.

The Metropolitan Police confirmed that an off-duty officer and a British Transport Police officer were injured but they sustained injuries that were not life threatening.

Witnesses also praised police, including at the nearby Katzenjammers bar.

“The police were absolutely brilliant, they came in and explained the situation,” patron Paul Connell told CNN. ” Armed police came in. They told us to remain on the floor but to stay calm. We were eventually led out of the bar and some kind people working in a hotel let us come in to use the bathroom and to give us water.”

“London is one of the safest global cities in the world,” Khan told CNN. “One of the reasons we’re kept safe is because of the hard work of our police and emergency services.

“Over the next few days, Londoners and visitors will be seeing an increased police presence. That will include increased armed officers.”

After the London attack in March, he said the same thing about safety in the city.

President Donald Trump criticized the Muslim mayor, posting on Twitter: “At least 7 dead and 48 wounded in terror attack and Mayor of London says there is “no reason to be alarmed!’ ”

On Saturday, he touted his travel ban from six Muslim-majority nations — an executive order that has been blocked in courts and is headed to the U.S. Supreme Court. He wrote on Twitter: “We need to be smart, vigilant and tough. We need the courts to give us back our rights. We need the Travel Ban as an extra level of safety!”

Trump then expressed support for Britain, writing: “Whatever the United States can do to help out in London and the U. K., we will be there – WE ARE WITH YOU. GOD BLESS!”

Putin: ‘I didn’t even really talk’ to Flynn during dinner