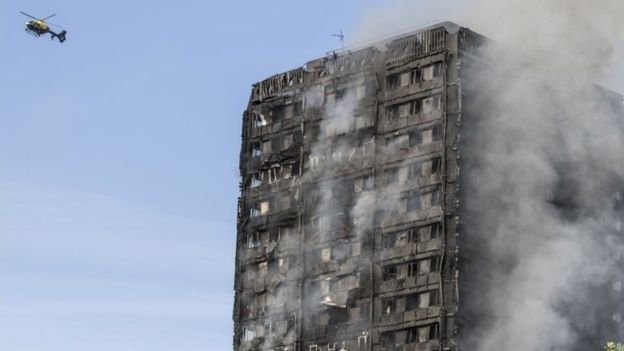 At least six people have died after a huge fire raged through the night at a west London 24-storey tower block, and police expect that number to rise.

Eyewitnesses described people trapped in the burning Grenfell Tower, in north Kensington, screaming for help and yelling for their children to be saved.

Firefighters, who rescued many people, were called at 00:54 BST and are still trying to put out the fire.

Police say there may still be people in the building who are unaccounted for.

The ambulance service said 69 patients had been taken to six hospitals across London, with 18 in critical care. A further 10 patients made their own way to hospital.

During the night, eyewitnesses said they saw lights – thought to be mobile phones or torches – flashing at the top of the block of flats, and trapped residents coming to their windows – some holding children.

It is understood that “several hundred” people would have been in the block when the fire broke out shortly after midnight, most of them sleeping.

Commander Stuart Cundy, of the Metropolitan Police, said the recovery operation would be “complex and lengthy”, and the number of fatalities was expected to rise.

He declined to give any details of the number of people who may be missing.

He said it was likely to be some time before police could identify the victims, adding that it was too early to speculate on the cause of the fire.

At 13:00 BST, Fire Commissioner Dany Cotton said firefighters expected to be on the scene for at least another 24 hours.

She said there were concerns that people were still inside the tower and she urged all residents to make sure they had reported themselves to police so that the authorities know they are safe.

Prime Minister Theresa May is “deeply saddened by the tragic loss of life”, said Downing Street.

Meanwhile, Labour leader Jeremy Corbyn is to demand a government statement in Parliament on Thursday on the tragedy, the BBC understands.

There must be a “full inquiry” into the fire, newly-elected Kensington MP Emma Dent Coad told the BBC.

“The ferocity of that fire was extraordinary and terrifying,” she said. “This must never happen again.”

Police and fire minister Nick Hurd was due to chair a cross-party meeting to look at how the government can assist the emergency services and local authorities.

Paul Munakr, who lives on the seventh floor, managed to escape.

“As I was going down the stairs, there were firefighters, truly amazing firefighters that were actually going upstairs, to the fire, trying to get as many people out the building as possible,” he told the BBC.

He said he was alerted to the fire not by fire alarms but by people on the street below, shouting “don’t jump, don’t jump”.

Eyewitness Jody Martin said: “I watched one person falling out, I watched another woman holding her baby out the window… hearing screams.

“I was yelling at everyone to get down and they were saying ‘We can’t leave our apartments, the smoke is too bad on the corridors.'”

Michael Paramasivan, who lives on the seventh floor with his girlfriend and young daughter, said he ignored official advice to stay in your home.

“If we had stayed in that flat, we would’ve perished. My gut instinct told me just to get the girls out. I wrapped the little one up because of the smoke and I just got them out.”

Another resident, Zoe, who lives on the fourth floor, said she was woken by a neighbour banging on her door.

“The whole landing was thick with smoke. The smoke alarms weren’t going off but the way it spread so quickly from the fourth floor, all the way up to the 23rd floor was scary.”

Grenfell Tower, built in 1974, is part of the Lancaster West Estate, a sprawling inner-city social housing complex of almost 1,000 homes.

Robert Black, chief executive of the tower’s management company, the Kensington and Chelsea Tenant Management Organisation, said: “The fire at Grenfell Tower is devastating and the reports of injury and losses of life absolutely heartbreaking.

“Along with my colleagues, I have been supporting residents since the early hours, working with the emergency services and the community.”

The BBC’s Andy Moore, who was at the scene through the night, described watching debris falling from the building, and hearing explosions and breaking glass.

Nick Timothy and Fiona Hill quit No 10 after election criticism