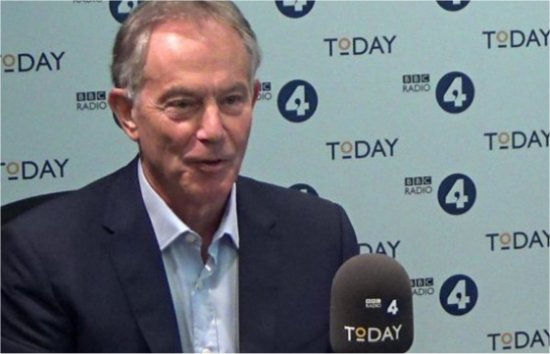 Some EU leaders may be prepared to be flexible on the free movement of people to help Britain stay in the single market, Tony Blair has said.

He told the Today programme one option was for Britain “staying within a reformed EU”.

The ex-PM said he would not disclose conversations he had had in Europe but that he was not speaking “on a whim”.

The government insists Brexit will give the UK greater control of its borders.

Mr Blair spoke to the BBC after he argued there was room for compromise on free movement of people in an article for his own institute.

He told Today the situation in Europe was different to how it had been a year ago when Britain voted to leave the EU, a move Mr Blair described as “the most serious it’s taken since the Second World War”.

“Europe itself is now looking at its own reform programme. They will have an inner circle in the EU that will be part of the eurozone and an outer circle.

“They will make reforms that I think will make it much more comfortable for Britain to fit itself in that outer circle,” he said.

He said “majorities” of people in France, Germany and the UK supported changes around benefits and with regards those who come to Europe without a job.

“I’m not saying these could be negotiated. I’m simply saying if we were looking at this from the point of view of the interests of the country, one option within this negotiation would be Britain staying within a reformed European Union.”

He said the majority of EU migrants in the UK are “people we want in this country”.

EU leaders have previously said the UK cannot stay in the single market, while limiting the free movement of people.

Mr Blair accepted Labour was behind its leader Jeremy Corbyn “for now”, but he warned if Brexit was combined with leaving the single market and then the largest spending programme Labour had ever proposed that “we would be in a very serious situation.”

Earlier in an article for the Institute for Global Change, Mr Blair said senior figures had told him they were willing to consider changes to one of the key principles of membership of the single market.

“The French and Germans share some of the British worries, notably around immigration, and would compromise on freedom of movement.”

But last week the EU’s chief negotiator, Michel Barnier, said the freedom of movement of people, goods, services and capital – the key principles of the single market – were “indivisible”.

Prime Minister Theresa May has pledged to control EU migration and has reiterated her commitment to reducing net migration to the tens of thousands.

She has said that outside the single market, and without rules on freedom of movement, the UK will be able to make its own decisions on immigration.

Mr Blair said leaving the single market was a “damaging position” shared by Labour and he urged the party’s leadership to champion a “radically distinct” position on Europe.

“Rational consideration of the options would sensibly include the option of negotiating for Britain to stay within a Europe itself prepared to reform and meet us half way,” he said.

Mr Blair said Labour’s vision of a “jobs first” Brexit outside the single market was a “contradiction in terms”.

“So when people blithely say, ‘We will get roughly the same terms as we do now with the single market,’ I literally know no-one in the European system who believes this,” he wrote.

He also said the Tories had lost their majority in the general election because large numbers of people voted to stop a “hard Brexit” and “rejected explicitly the mandate Theresa May was demanding”.

Mr Blair has previously said Brexit was an issue he felt so strongly about, that it tempted him to return to politics.

However, Labour MP Frank Field, who backed Brexit, said he did not think Mr Blair was “a person to influence public opinion now”.

“We’re now set on the course of leaving [the EU]. We actually need a safe harbour to continue those negotiations when we’re out.

“And I wouldn’t actually be believing those people who are set on destroying our attempts to leave, who are now appearing as wolves in sheep’s clothing.”

Richard Tice, of pro-Brexit group Leave Means Leave, said Mr Blair’s comments “demonstrate how out of touch he is with British voters”.

“The former prime minister believes that freedom of movement is the only issue with the EU, when in reality the British people also voted to leave in order to take back control of our laws and money and no longer be dictated to by the European Court of Justice,” he added.

Related Topics:BrexitEUEuropeTony Blair
Up Next