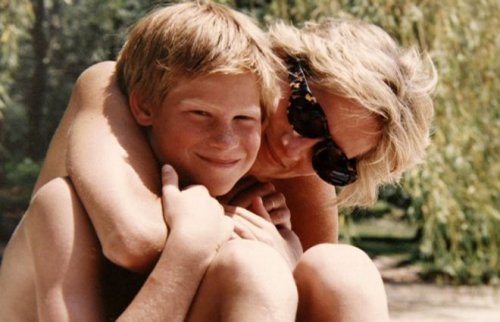 Prince William and Prince Harry have spoken of their regret that their last conversation with their mother was a “desperately rushed” phone call.

Prince Harry, who was 12 when Princess Diana died, said: “All I do remember is probably regretting for the rest of my life how short the phone call was.”

In an ITV documentary to mark 20 years since their mother’s death, the princes also spoke of her “fun” parenting.

Diana encouraged them to be “naughty” and smuggled them sweets, they said.

The princes added that she was a “total kid through and through”, who understood the “real life outside of palace walls”.

Unpublished photos of the princes with their mother feature in the programme.

Prince Harry and Prince William are seen looking through Diana’s personal album as they talk about how their childhood memories of their mother sat alongside her global image and influence as a campaigner for the homeless, Aids victims, and banning landmines.

Princess Diana was killed in a car crash in Paris on 31 August 1997 when Prince William was 15 and Prince Harry was 12.

Prince William said taking part in the programme initially seemed “quite daunting” but had been “a healing process as well”.

He said they wanted “her legacy to live on in our work and we feel this is an appropriate way of doing that”.

But the Duke of Cambridge said the last conversation with their mother weighs “quite heavily” on his mind.

It took place while the brothers were having a “very good time” with their cousins at Balmoral, the Queen’s home in Scotland.

“Harry and I were in a desperate rush to say goodbye, you know ‘see you later’… if I’d known now obviously what was going to happen, I wouldn’t have been so blasé about it and everything else,” he said.

Prince William says in the interview he remembers what his mother said – but does not reveal details of the conversation.

Prince Harry said: “It was her speaking from Paris, I can’t really necessarily remember what I said but all I do remember is probably regretting for the rest of my life how short the phone call was.”

Recalling Princess Diana’s sense of humour, Prince Harry said: “Our mother was a total kid through and through.

“When everybody says to me ‘so she was fun, give us an example’ all I can hear is her laugh in my head.”

He added: “One of her mottos to me was, you know, ‘you can be as naughty as you want, just don’t get caught’.

“She was one of the naughtiest parents. She would come and watch us play football and, you know, smuggle sweets into our socks.”

Prince William said his mother was “very informal and really enjoyed the laughter and the fun”.

She could be “sort of the joker”, he added, and “loved the rudest cards you could imagine”.

He said: “I would be at school and I’d get a card from my mother. Usually she found something, you know, very embarrassing, you know, a very funny card, and then sort of wrote very nice stuff inside.

“But I dared not open it in case the teachers or anyone else in the class had seen it.”

He also talked about the “very funny memory” of coming home from school to find his mother had invited supermodels Cindy Crawford, Christy Turlington and Naomi Campbell to their home in Kensington Palace.

“I was probably a 12 or 13-year-old boy who had posters of them on his wall,” he told Monday’s documentary, Diana, Our Mother: Her Life and Legacy.

“I went bright red, and didn’t know quite what to say and sort of fumbled and I think pretty much fell down the stairs on the way up. I was completely and utterly awestruck.”

Earlier this month, the princes attended a service to re-dedicate their mother’s grave at Althorp House in Northamptonshire, on what would have been her 56th birthday.

Prince Harry said he had only cried twice for his mother – one of the times was at the funeral service at Althorp in 1997.

“So there’s a lot of grief that still needs to be let out,” he said.

Prince William, who was accompanied at the re-dedication service by the Duchess of Cambridge, Prince George and Princess Charlotte, said he keeps the memory of his mother alive for his children by “constantly talking about granny Diana”.

“She’d be a lovely grandmother, she’d absolutely love it, she’d love the children to bits,” he said.

And he joked: “She’d be a nightmare grandmother, absolute nightmare… She’d come, probably at bath time, cause an amazing… scene, bubbles everywhere bath water all over the place and then leave.”

Reflecting on the anniversary of Princess Diana’s death, Prince Harry told ITV: “To myself and William she was just the best mother ever”.

He said: “It has been hard and it will continue to be hard, there’s not a day William and I don’t wish that she was still around and we wonder what kind of mother she would be now, and what kind of a public role she would have and what a difference she would be making.”

The princes have also both agreed to take part in a forthcoming BBC documentary about their mother.

They were were speaking to ITV from their home at Kensington Palace where they will unveil a statue of their mother in its public gardens on the 20th anniversary of her death.

Prince William said: “We won’t be doing this again – we won’t speak as openly or publicly about her again, because we feel hopefully this film will provide the other side from close family friends you might not have heard before, from those who knew her best and from those who want to protect her memory, and want to remind people of the person that she was.”