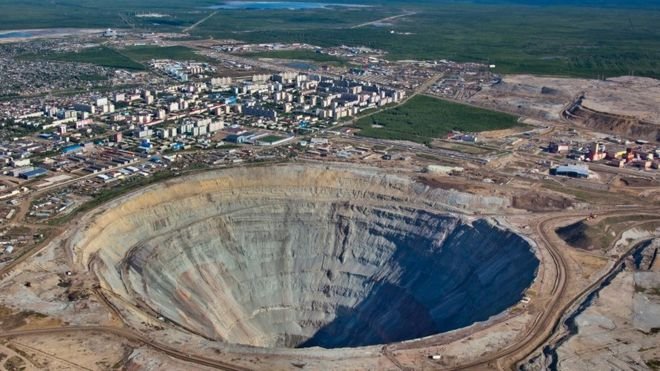 Eight miners are missing after a flood at Russia’s largest diamond mine.

Water leaked into an underground shaft on Friday morning when more than 100 workers were inside.

Most have been rescued from Mir mine in eastern Siberia, according to diamond company Alrosa, which runs it.

However, the company said reports that those still missing had been located were not true and the search continues. Divers have reportedly arrived at the scene.

The town of Mirny in Yakutia has declared a state of emergency.

One man was rescued on Saturday morning.

He is in intensive care at a nearby hospital with a bruised lung, but his life is not in danger, Alrosa said.

Chief Executive Sergey Ivanov said every effort was being made to find the other workers.

The company said 142 people had been brought safely back to the surface so far.

The adjacent open-pit mine, one of the world’s largest excavated holes, is no longer operational, as mining has moved underground.

However, flooding of the exhausted quarry may have caused the problem, according to local emergency services, as water leaked into one of the active mine’s pumping stations.

The crater contained some 300,000 cubic meters of water, the equivalent of 120 Olympic-size swimming pools, the emergencies ministry said.