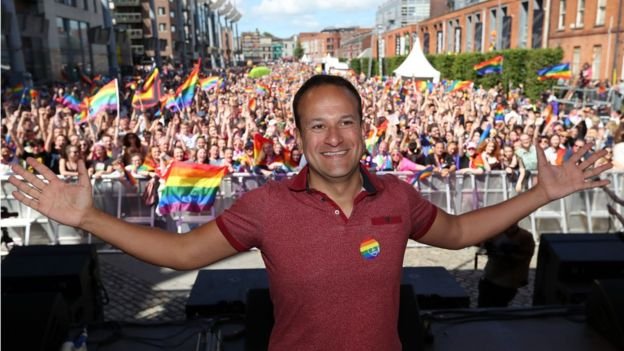 Leo Varadkar has said it is “only a matter of time” before same-sex marriage is introduced in Northern Ireland.

The Irish prime minister was speaking at a Belfast Pride breakfast event in the city on Saturday morning.

The Republic of Ireland’s first openly gay leader, said he was attending the event as a “gesture of solidarity”.

Northern Ireland is the only place in the UK where a ban on same-sex marriage still exists.

In 2015, the Republic of Ireland voted to legalise same-sex marriage in a referendum.

Mr Varadkar told crowds outside the Northern Whig in Belfast that he was not “here to unsettle anyone”.

“But I am here to state my support and my government’s support for equality before the law and individual freedom for all citizens wherever they may reside,” he said.

The DUP, which opposes same-sex marriage, has raised no opposition to his attendance at the event, but across the street a group of Free Presbyterians staged a protest.

The taoiseach (Irish prime minister) added: “Difference makes us stronger and that’s something I believe in and something that I think can mark Northern Ireland out in the future.

“I totally appreciate that this it is an issue for the Northern Ireland Assembly, but we need an assembly up and running.”

Mr Varadkar said he had given his opinion on the issue to former first minister, Arlene Foster.

Thousands of people are expected to attend the Belfast Pride parade on Saturday afternoon, although Mr Vardakar has said he was not able to attend the main event because he had a prior commitment.

Mr Varadkar also said he was pleased that the Police Service of Northern Ireland (PSNI) and Gardaí (Irish police) would be marching in the parade in uniform for the first time.

“Doesn’t that say something really good about Northern Ireland and the way it has developed as a society in the past 10 or 20 years?” he added.

On Friday, the first day of Mr Vardakar’s visit, he called for “unique solutions” to preserve the relationship between the UK and the European Union after Brexit.

During a speech at Queen’s University in Belfast he also warned “the clock is ticking” in Brexit negotations and that “every single aspect of life in Northern Ireland could be affected” when the UK leaves the European Union.

On Friday afternoon, the taoiseach met members of Northern Ireland’s political parties, including representatives from the DUP, Sinn Féin, the SDLP and Alliance.

His meeting with DUP leader Arlene Foster came days after a row between the party and the taoiseach over the Irish border post-Brexit.

But Mrs Foster told the BBC she had thanked the taoiseach for “discounting” the idea of a border along the Irish sea.