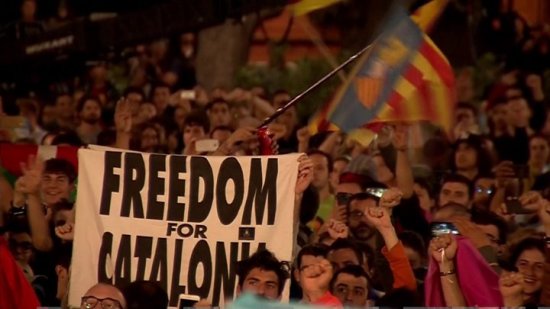 A general strike threatens to bring large areas of Catalonia to a standstill, following the Spanish region’s disputed referendum.

The strikes was called by Catalan trade unions and associations due to “the grave violation of rights and freedoms” seen during Sunday’s ballot.

Madrid had deemed the referendum illegal. However, more than 2.2m people reportedly voted in spite of this.

But hundreds were hurt as Spanish police tried to stop it going ahead.

Some of the officers ordered to prevent people casting their vote were seen firing rubber bullets, storming into polling stations and pulling women by their hair.

Tuesday’s strike, a reaction to the violence, will see public transport, schools and clinics in Catalonia closed for the day.

Barcelona’s famous football team is also expected to go on strike, although it is not due to play a match, as are the city’s public universities and contemporary art museum.

Meanwhile, the country’s politicians are trying to find a way forward.

Catalan President Carles Puigdemont has said he wants a new understanding with the central government in Madrid, but the government, led by Prime Minister Mariano Rajoy, has warned it could suspend autonomy of the wealthy north-eastern region.

However, while Catalan officials say almost 90% of voters backed independence, turn out was relatively low at a reported 42%, potentially weakening Mr Puigdemont’s position.

What’s more, given the chaotic nature of the vote, the turnout and voting figures should be taken with a pinch of salt, says the BBC’s Tom Burridge in Barcelona.

Mr Rajoy has said the vote made a “mockery” of democracy, saying that Catalans had been fooled into taking part in the illegal vote.

The prime minister was due to hold talks with Pedro Sanchez, the leader of the main opposition Socialist party, as well as Albert Rivera, the head of the centrist Ciudadanos party, late on Monday.

Mr Puigdemont has called on the international community to help mediate between the two sides.

However, the European Commission described the crisis as “an internal matter” for Spain, that has to be dealt with in line with the constitutional order.