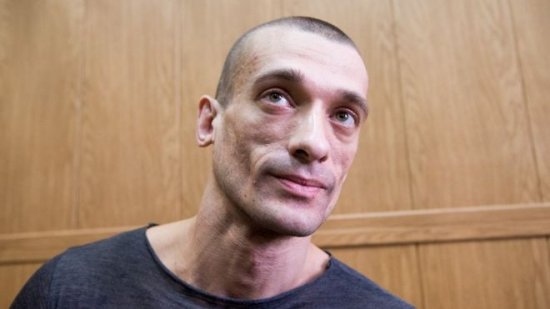 A controversial Russian artist who was granted political asylum in France has been arrested after setting fire to a bank in central Paris, police say.

Pavlensky, 33, first gained notoriety by nailing his scrotum to Moscow’s Red Square in 2013.

He fled Russia in January over sexual assault allegations, which he denies.

Last year he was found guilty of criminal damage for dousing the doors of the headquarters of Russia’s powerful security service, the FSB, in petrol and setting them on fire.

After being handed a half-a-million rouble ($7,850) fine and released, he hit out at surveillance in Russia, saying society was being controlled by “uninterrupted terror”.

It is not clear what his intention was, but the self-proclaimed political artist was quoted as saying that “the bankers taken the place of monarchs”.

He was taken into custody along with his partner Oksana Shalygina for causing “damage by fire”, AFP quoted police as saying.

Previous projects have seen him wrapping himself in barbed wire, sewing his lips together and leaping naked onto the wall of a psychiatric institute to lop off his earlobe.