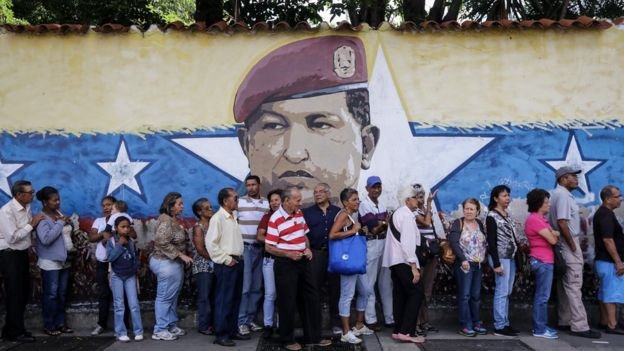 A nurse aged 61 has been shot dead while waiting to vote in an unofficial, opposition-organised referendum in Venezuela’s capital, Caracas.

Men on motorbikes fired at a queue, killing her and wounding three others.

The opposition blamed a “paramilitary” gang. Video from the scene showed people rushing away from the gunshots. Many fled to a church.

Venezuela is in crisis, and more than 100 people have died in political clashes since April.

Opposition spokesman Carlos Ocariz said of the shooting: “We lament this very much, with great pain.”

Prosecutors said they would investigate the incident, and the woman was named as Xiomara Soledad Scott.

She died minutes after reaching hospital.

Separately, journalist Luis Olavarrieta was kidnapped, robbed and beaten by a group of people. He managed to escape and images emerged of him receiving medical attention.

An official vote will be held on 30 July for a new assembly, which would have the power to rewrite the constitution and to dissolve state institutions.

But critics say the new assembly could herald dictatorship.

Opposition politicians organised Sunday’s unofficial poll, held in improvised polling stations at theatres, sports grounds and roundabouts within Venezuela and in more than 100 countries around the world.

While the vote was only symbolic, BBC South America correspondent Katy Watson said the opposition hoped that a high turnout would heap pressure on the government.

Queues started to form early and there was a festive atmosphere in most places.

“They have convened an internal consultation with the opposition parties, with their own mechanisms, without electoral rulebooks, without prior verification, without further verification. As if they are autonomous and decide on their own,” he said.

Catia, where the shooting happened, is a poorer part of the Venezuelan capital where support for the socialist government, headed first by Hugo Chavez and since his death by Mr Maduro, has historically been high.

Mr Maduro argues that the constituent assembly is the only way to help Venezuela out of its economic and political crisis.

He has said that a new constitution would “neutralise” the opposition and defeat “coup-plotters” and thereby promote peace in Venezuela.

Opposition leaders fear that the process of setting up a new constituent assembly and rewriting the constitution would almost certainly delay this year’s regional elections and next year’s presidential election.