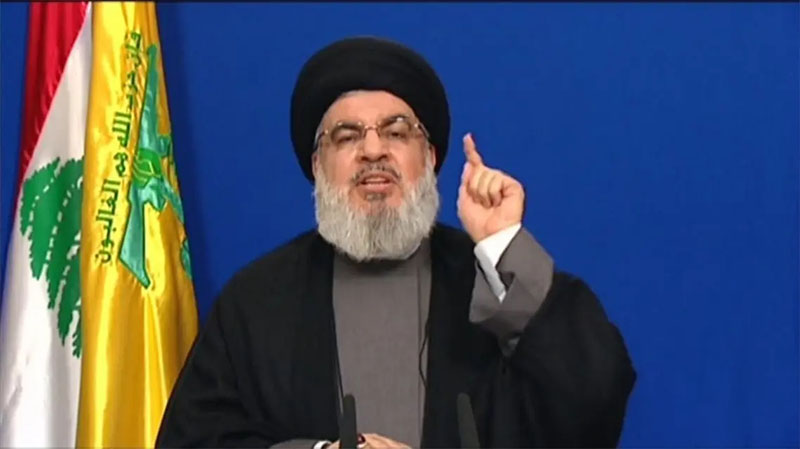 Lebanon’s Hezbollah chief Hassan Nasrallah accused on Monday the Lebanese Forces party of seeking to ignite a “civil war” in the country after last Thursday’s violence.

“The real agenda of the Lebanese Forces party is the civil war because it leads to the displacements of Christians and confines them to a certain area, and thus the establishment of a Christian canton dominated by the Forces party where there is no room for anyone else,” Nasrallah said in his first remarks since the bloody street violence.

Nasrallah stressed that his Iran-backed militia has never been stronger and added that it has 100,000 “trained and armed” fighters armed with weapons at its disposal. This was the first time Nasrallah disclosed the size of his militia.

“I advise the Lebanese Forces party to give up this idea of internal strife and civil war. You are wrong one hundred percent, your calculations are wrong. The region has never seen Hezbollah as strong as it is now,” he said.

He also demanded an investigation into the events of last Thursday to hold those responsible accountable for their actions, adding that Hezbollah would take action if the judiciary did not.

Tensions over the investigation into the Beirut blast ignited street violence which led to seven deaths, all of whom were Shia.

They were killed in what the powerful Shia militia Hezbollah called an ambush by the Lebanese Forces, a Christian party led by Samir Geagea.

The Lebanese Forces denied the accusation and pointed the finger of blame at Hezbollah for provoking trouble by sending supporters into the Christian neighborhood of Ain al-Remmaneh where it says four residents were wounded before a shot was fired.

The street violence, the worst in over a decade, began as supporters of Hezbollah and its Shia ally, Amal, began gathering for a protest to demand the removal of Judge Tarek Bitar, who is investigating the blast that killed more than 200 people.

Nasrallah said Hezbollah was not the enemy of Christians in Lebanon, and added: “The biggest threat for the Christian presence in Lebanon is the Lebanese Forces party and its head.”

“Christians in Lebanon, everyone who wants to present you the Shia and Muslims as an enemy, that is injustice, slander and a huge mine in the country,” Nasrallah said.