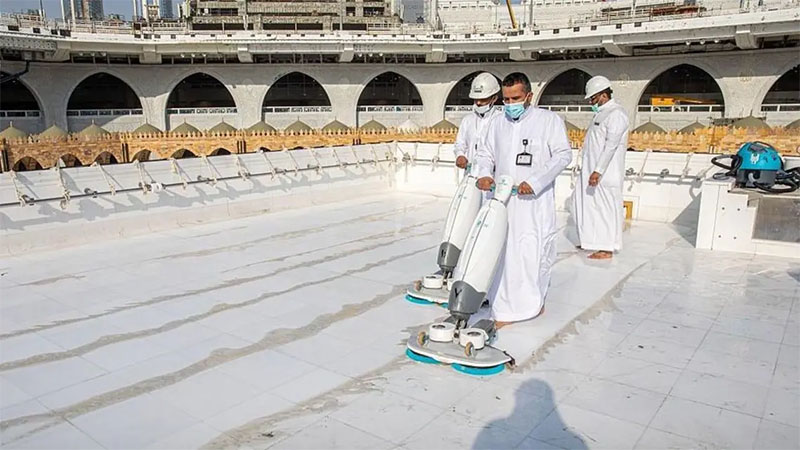 The cleaning work performed “on the surface of the Holy Kaaba through a specialized national technical team” is carried out by the General Presidency for the Affairs of the Grand Mosque and the Prophet’s Mosque according to a schedule.

The disinfection process uses the latest cleaning technologies, SPA said in a report.

“The cleaning mechanism is carried out through several stages, the first of which is sweeping the surface of the Kaaba, removing dust and bird droppings, then wiping the entire surface and the cladding holder, the wall, and the door of the Kaaba roof from the outside with wet fabrics.”

SPA added: “Rinsing and suctioning, then spraying the surface with water again and wiping and then the drying stage, and in the end, natural rose water is sprayed,” all within a period that does not exceed 20 minutes.

Last month, the Grand Mosque in Mecca operated at full capacity, with worshippers praying shoulder-to-shoulder for the first time since the coronavirus pandemic began.

Earlier this week, the Kingdom announced that overseas pilgrims can now apply for permits for Umrah and prayers at the Grand Mosque in Mecca, as well as for visiting the Prophet’s Mosque in Medina via approved mobile applications.

Israel’s Netanyahu back in court for graft trial