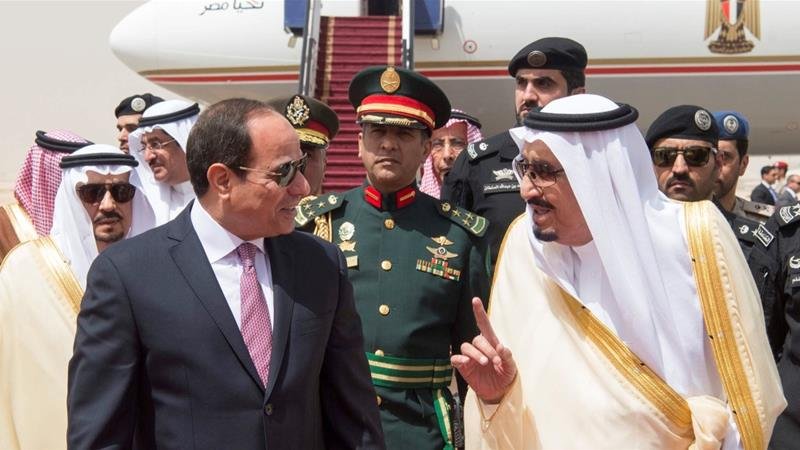 Egyptian President Abdel Fattah el-Sisi received a royal welcome from King Salman as he landed on Sunday in Saudi Arabia for a visit to boost ties after months of tension.

Salman, surrounded by key Saudi officials, greeted Sisi as he stepped off the plane in the capital Riyadh and hosted him for lunch, the official Saudi Press Agency said.

The Egyptian presidency announced the visit in a statement on Friday, saying Sisi’s trip was in response to an invitation by Salman and aimed at “bolstering strategic relations between the two countries”.

It said Salman and Sisi would discuss “regional and international issues of common interest”.

“The struggle against terrorism which threatens security and stability” in the region and beyond would top their agenda, it said.

Sisi met Salman on the sidelines of an Arab League summit in Jordan last month to break the ice after months of apparent tensions between the two Middle Eastern allies.

That encounter on March 29 came days after Egypt announced that Saudi energy giant Aramco had resumed delivering shipments of petroleum products after abruptly suspending them in October.

But the move came after Egypt voted in favour of a Russian-drafted UN Security Council resolution on Syria that Saudi Arabia strongly opposed.

“These are two former giants in the region who are trying to regain their roles, and they understand that by working together they can help each other,” Rami Khouri, a senior public policy fellow with the Issam Fares Institute at the American University of Beirut, told Al Jazeera.

Moscow is a staunch supporter of Syrian President Bashar al-Assad while Riyadh is a key backer of the rebels who are fighting his government.

Ties between Cairo and Riyadh also suffered after an agreement to hand over to Saudi Arabia two Red Sea islands – signed during a visit by Salman to Cairo last year – was blocked by a court ruling.

Earlier this month, an Egyptian court ruled the decision to block the transfer of Tiran and Sanafir to Saudi Arabia was invalid.

Cairo has said the islands were Saudi territory that had been leased to Egypt in the 1950s.

Saudi Arabia supported Egypt with billions of dollars in aid after Sisi toppled President Mohamed Morsi in 2013 when he was head of the Egyptian army.

Saudi Arabia is opposed to the now-outlawed Muslim Brotherhood, to which Morsi belongs.