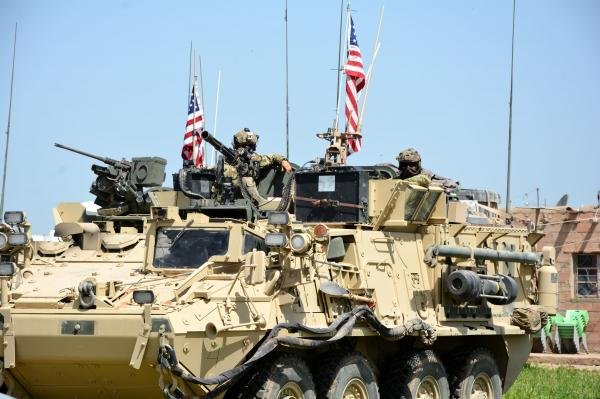 The United States is aligned with People’s Protection Units, or YPG, and the Peshmerga in Iraq — both Kurdish groups. The YPG fights in the Syrian Democratic Forces, which is considered a terrorist group by the Turkish government.

“The patrols’ purpose is to discourage escalation and violence between two of our most trusted [counter-ISIS] partners and reinforce the U.S. commitment to both Turkey and the SDF in their fight against ISIS,” a statement from the U.S.-led joint command said about efforts against the Islamic State.

“We ask both of our partners to focus their efforts on ISIS. ISIS poses the greatest threat to peace and stability in the region, and indeed the entire world.”

“We are seriously concerned to see U.S. flags in a convoy that has YPG rags on it,” Erdogan told reporters at Istanbul’s Ataturk Airport before leaving for a two-day visit to India.

Erdogan said he would bring up the issue with U.S. President Donald Trump when the NATO allies meet in Washington on May 16.

“If we are against global terrorism, then we need to tell them [the U.S.] about these issues. If we do not work together against terrorism, then tomorrow it will strike at another ally,” Erdogan said.

On April 16, Erdogan won a historic referendum that granted him sweeping new powers.

He is cracking down on discourse.

On Saturday, 3,974 civil employees were fired, including soldiers and academic personnel, because of suspected links to terrorists, the Anadolu News Agency reported. Also, 18 academic foundations, 14 nongovernmental organizations and 13 health groups were closed because of activities against national security, Anadolu reported.

The government banned television matchmaking shows and blocked access to Wikipedia because it mentioned terror activity, as well.

Turkey had warned Wikipedia to remove the content, but the nonprofit encyclopedia refused. Wikimedia Foundation, a nonprofit organization that supports Wikipedia, said it is seeking a judicial review of the decision.