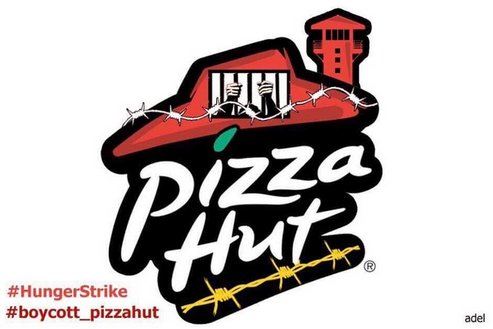 Palestinians are calling for a boycott of Pizza Hut after the food company’s Israel branch shared a picture on social media mocking the leader of a mass hunger strike in Israeli prisons.

Israel’s Pizza Hut used the picture as an advertisement, writing on top of the photo: “Barghouti, if you’re going to break a strike, why not pizza?”

A Pizza Hut pizza box was also photoshopped into the photo, poking out beneath the prison bunk bed.

Barghouti is leading more than 1,500 prisoners in an open-ended hunger strike against the practice of medical negligence, solitary confinement, arbitrary attention, the denial of family and lawyer visits, and detentions without charge or trial.

They have gone without food since April 17.

Representatives of the Palestinian hunger strike on Monday called the claims “false rumours” and an Israeli attempt at “physchological warfare”.

The National Committee for the Freedom and Dignity Strike said the footage of Barghouti released by the Israeli Prison Service (IPS) dates back to 2004.

The advertisement sparked widespread criticism, with Palestinians and Palestine supporters taking to social media to call for a global boycott of Pizza Hut and legal action.

Others shamed the company for attempting to capitalise on a hunger strike aimed at garnering dignity for Palestinian prisoners.

The Boycott, Divestment and Sanctions movement also called for a worldwide boycott of the chain for its “mocking of the prisoner leader and its involvement in the Israeli occupation”.

Some Twitter users created their own graphic, redesigning the Pizza Hut logo to include barbed wire, prison bars and a guard tower.

In a public apology posted to its international Facebook page, Pizza Hut apologised for the “completely inappropriate” advertisement and said that it “does not reflect the values of our brand”.

According to polls, Barghouti is the most popular political figure in the occupied West Bank, and would likely replace current Palestinian President Mahmoud Abbas if elections were held today.