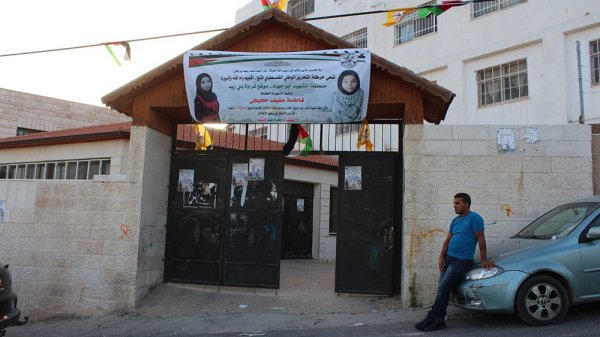 At the Hjeiji family home in the occupied West Bank village of Qarawat Bani Zeid, classmates, friends and relatives of Fatima Hjeiji lined up to pay their respects.

One by one, the women and girls hugged Fatima’s mother Dareen and offered sympathetic words.

“She was such a lovely girl. Everybody at school loved her,” said Nadin Imad, 17, who attended the girls’ school in the village with Fatima.

“I was in class with her since the first grade. She had a very strong character and was not afraid to say whatever she wanted.”

The previous afternoon had begun like any other afternoon in the Hjeiji household. Fatima, 16, had returned home from school around 1.30pm and updated her mother on the morning’s events.

“It was a normal day, nothing unusual,” said Dareen Hjeiji.

“She told me about her school day, friends, teachers and her work. I had to visit the doctor so I left the house to go to the appointment. Fatima didn’t tell me she was going to Jerusalem to visit her relatives.”

Fatima’s uncle Salameh Hjeiji told Al Jazeera that he believed the teenager had gone to visit another uncle and aunt who lived in the Old City of Jerusalem.

However, the teenager had not told her immediate family of any plans to do so and did not have an entry permit that would have enabled her to pass through the Israeli checkpoints that separate Jerusalem from the occupied West Bank.

Later that evening a family member received a phone call from the DCO, the joint Palestinian-Israeli military coordination office in the West Bank, informing them that Fatima had been shot dead by Israeli paramilitary police close to Damascus Gate in Jerusalem.

Soon afterwards, Fatima’s father Afeef received a call from an Israeli intelligence official, asking him to come to Jerusalem and identify Fatima’s body.

He was also questioned by intelligence officers for three hours that evening, he told Al Jazeera.

The Israeli police said in a statement that Fatima had been holding a knife and tried to attack Israeli paramilitary officers close to an entrance to the Old City, who then shot and killed the teenager.

The statement added that a letter had been found on the dead girl, which cited Quranic verses, addressed her family and was signed “martyr”.

But Fatima’s mother could not fathom what had happened the previous evening and believed that the police officers had no justification for shooting and killing her daughter.

“I could never imagine that my daughter would do this,” she said. “I don’t believe what the Israeli police said.”

According to eyewitness reports  cited by local media,  Hjeiji had been standing around 10 metres away from the police officers when they shot her.

Some accounts noted that the police officers continued to fire at the teenager after she had fallen to the ground and no longer posed a threat.

Since a wave of sporadic violence began in October 2015, mostly involving Palestinian street attacks on Israelis, a number of local and international human rights groups have raised concerns that Israeli security forces have used excessive force when confronting Palestinians who had carried out attacks or been suspected of doing so.

The Israeli police relaxed its open-fire regulations in December 2015, permitting officers to open fire with live ammunition on those throwing stones or firebombs as an initial option, without having to use non-lethal weapons first.

In a recently published investigation, Israeli human rights group B’Tselem found that 101 Palestinians had been killed by Israeli security forces in 2016, including 31 minors.

The NGO reported that “these incidents were made possible by an open-fire policy that permits both shooting to kill in instances defined as ‘incidents of assault’ and a trigger-happy approach to demonstrations or stone-throwing”.

DCI-Palestine (DCIP), a children’s rights NGO, noted that Fatima was the seventh Palestinian child to be killed by Israeli security forces in 2017.

“Such excessive force, without a modicum of accountability, signals tacit approval for killing children with impunity.”

The eldest of four siblings, Fatima had been a strong pupil and enjoyed writing poetry and speeches in her spare time, but she really excelled in mathematics, her family said.

“She was part of a club for gifted mathematics students in Ramallah,” said her mother Dareen.

Dareen described her as quiet, calm and kind, noting that she was popular among her classmates.

The teenager was politically aware and had ambitions to work in the media after completing her education.

“She was a good speaker and a good writer,” said Dareen. “She always watched the news because she wanted to be a journalist when she was older.”

No radiation reported after collapse of plutonium plant tunnel in Washington