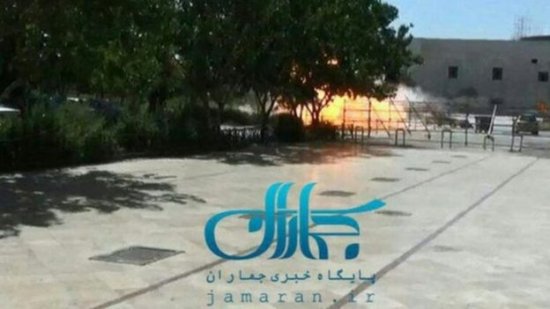 Twin attacks on the Iranian parliament and Ayatollah Khomeini’s mausoleum in the capital, Tehran, have killed at least 12 people and injured many more.

After hours of intermittent gunfire, officials said both incidents were over and the attackers were dead.

The Islamic State (IS) group has said it carried out the attacks, which would be a first in Iran.

Iran’s powerful Revolutionary Guards accused Saudi Arabia and the US of being behind the attacks.

“This terrorist action, coming one week after the meeting of the president of the United States with the leader of the one of the region’s reactionary governments (Saudi Arabia)… shows they are involved in this savage action,” it said in a statement.

The US state department condemned the attack, saying “the depravity of terrorism has no place in a peaceful civilised world”.

President Hassan Rouhani said Iran’s message was that “terrorism is a global problem”, and he called for “regional and international co-operation and unity”.

Iran’s Supreme Leader Ayatollah Ali Khamenei said the attacks would have “no effect” on the country.

In a statement, IS warned of further attacks against Iran’s Shia Muslim majority.

How did the attacks unfold?

Gunmen armed with Kalashnikovs entered the parliament on Wednesday morning. Images from the scene showed a major security operation as forces surrounded the building.

Heavy gunfire could be heard.

Iranian authorities denied that there had been a hostage situation inside the parliament building.

Reports said the gunmen had entered parliament via a public entrance, dressed as women.

Iranian media later reported that four attackers inside the parliament building had been killed by security forces.

At the mausoleum in southern Tehran, which is dedicated to the Islamic Republic’s founder Ayatollah Khomeini, attackers began their assault by opening fire.

The governor of Tehran said one attacker there had detonated a suicide vest and another had been killed by security forces, state broadcaster Irib reports.

Images from the scene showed grenades and magazines for automatic weapons, apparently recovered from the body of an attacker.

The suicide attacker was a woman, reports suggested.

It is not clear whether the death toll of 12 includes the attackers, or whether the victims were killed at both incidents or solely at the parliament.

About 40 people were injured in the two attacks, according to emergency services chief Pir Hossein Kolivand.

Iranian officials say they managed to foil a third attack.