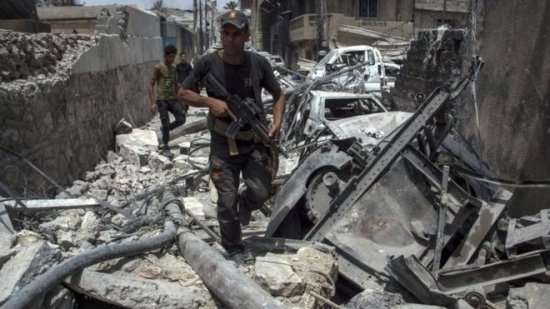 Fierce clashes and rising numbers of suicide attacks have been reported in Mosul as Iraqi troops try to recapture the city from Islamic State militants.

The last IS-held quarter, known as the Old City, was rocked by air strikes and artillery salvos, with local commanders expecting to retake full control soon.

However, they are facing more suicide attacks, including several from female bombers, in the battle’s final phase.

The major offensive against IS in Mosul was launched in October 2016.

The government announced the full “liberation” of eastern Mosul in January 2017. But the west of the city has presented a more difficult challenge, with its narrow, winding streets.

“The fighting is becoming harder every day because of the nature of the Old City,” Lt Gen Abdulghani al-Assadi, a commander of Iraq’s elite Counter-Terrorism Service, was quoted as saying by the AFP news agency.

He added that the same conditions that were beneficial for IS fighters also helped to shield Iraqi troops from snipers.

Lt Gen Sami al-Aridhi, another CTS commander, told AFP: “The enemy has been using suicide bombers, especially women, for the past three days in some of the neighbourhoods. Before that, they were using snipers and bombs more.”

Some of the suicide bombers were reportedly teenage girls.

There were two female suicide attacks on troops on Monday, while seven other women bearing explosives attempted to approach troops but were intercepted, AP news agency reported.

To prevent such attacks, Iraqi commanders said they were now ordering women fleeing from the Old City to remove veils before approaching soldiers. Men were told to remove their shirts.

The UN has said that IS may be holding more than 100,000 people in Mosul as human shields.

The Iraqi army says it believes there are no more than 300 militants left in Mosul, compared with almost 6,000 at the start of the offensive in October.

Brigadier General Yahya Rasool told state TV that “victory is very near”, while another commander has estimated that “the battle will end in five days to a week”.

IS fighters seized Mosul in June 2014.

Qatar is given a further 48 hours to agree to demands