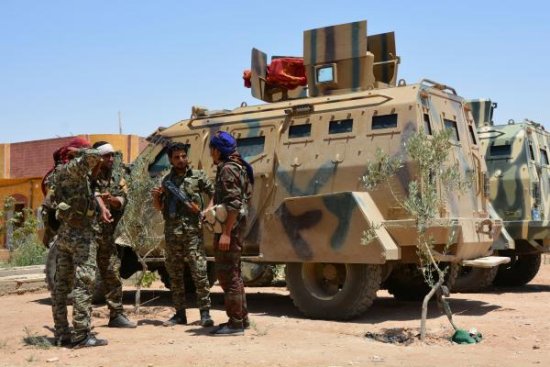 U.S.-backed fighters have broken through a wall surrounding the Old City of Raqqa, a stronghold for Islamic State fighters in the militant group’s de facto capital in Syria, U.S. Central Command said.

The Syrian Democratic Fighters — a militia of rebel groups led by Kurdish YPG fighters — breached the Rafiqah wall, which surrounds the Old City, on Monday. Brett McGurk, U.S. special envoy to the coalition to defeat the Islamic State, announced the advance in a statement Tuesday on his Twitter account.

The statement said the Islamic State — also identified as ISIS, ISIL and Daesh — was using the historic wall as a fighting position. They had planted mines and improvised explosive devices at several locations along the wall.

“SDF Fighters would have been channeled through these locations and were extremely vulnerable as they were targeted with vehicle-borne IEDs and indirect fire from heavy machine guns, rocket-propelled grenades and snipers as they tried to breach the Old City,” the release said.

Fighters breached the wall by targeting strikes on two 25-meter sections of the wall, with the intent to preserve the integrity of the remainder of the 3.1-mile long wall. The wall was constructed in the 8th century by the Abbasid dynasty.

“Unlike ISIS, who deliberately destroyed the ruins of Palmyra, [Syria], and the al-Nuri mosque [in Mosul, Iraq], and uses sites such as the Rafiqa wall, hospitals, schools and mosques as weapons storage facilities and fighting positions, coalition forces are making a great effort to protect civilians and preserve these sites for future generations,” coalition spokesman Col. Ryan Dillon said.

McGurk described the breach as a “key milestone” in the fight to regain control of Raqqa from IS militants.

Meanwhile, SDF fighters also advanced along the southern bank of the Euphrates River this weekend, taking over control of three villages along the highway to Deir Ezzor, Al Masdar News reported. The fighters took over Hussainiya, Kasrat Mohamed Ali and Ratlah, as well as Ittihad University.

The SDF has called on Raqqa residents to evacuate so they do not become trapped, are not killed by Islamic State snipers and are not used as human shields.