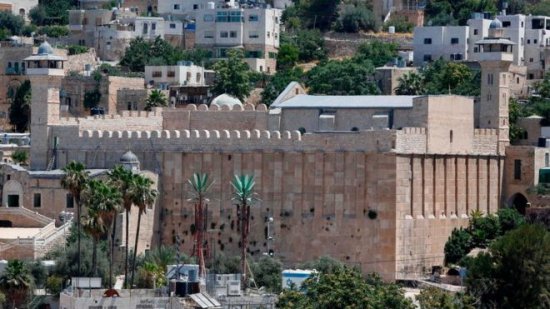 Unesco has designated Hebron’s Old City and the Tomb of the Patriarchs in the occupied West Bank a Palestinian World Heritage site despite Israeli protests.

A resolution passed by a committee of the UN cultural agency also put them on a list of sites considered “in danger”.

The Tomb of the Patriarchs – also known as the Ibrahimi Mosque – is revered by Jews, Muslim and Christians as Abraham, Isaac and Jacob’s burial place.

It is the second holiest site in Judaism and the fourth in Islam.

It has been a flashpoint for decades, with several hundred Jewish settlers living in enclaves nearby, surrounded by some 200,000 Palestinians.

Palestinian diplomats had urged Unesco to fast track Hebron’s inscription onto the List of World Heritage in Danger, accusing Israel of an “alarming” number of violations that included vandalism, property damage, and other attacks that had an impact on its authenticity and integrity.

Inscription would place the site under international standards of conservation, and would oblige Unesco to review its situation every year, they said.

Israel had rejected the Palestinian allegations and complained that the resolution, which refers to Hebron’s “Islamic history”, denied a Jewish connection to the city.

The US had argued that the Tomb of the Patriarchs was “under no immediate threat” and that adding it to the list of sites in danger “risked undermining the seriousness such an assessment by Unesco should have”.

It had also warned that the resolution might undermine efforts by US President Donald Trump to revive the Israeli-Palestinian peace process.

Unesco’s World Heritage Committee held a secret ballot on the Hebron resolution on Friday at its 41st annual summit in Krakow, Poland. The unusual step was requested by three member states.

Twelve ended up voting in favour, while three opposed it. Six abstained.

“Today, Palestine and the world, through Unesco, celebrate Hebron as part of world heritage, a value that transcends geography, religion, politics, and ideology,” a Palestinian foreign ministry statement said.

“This vote celebrated facts and rejected the shameless high-profile political bullying and attempts at extortion.”

City of our fathers

Israeli Education Minister Naftali Bennett, who heads Israel’s Unesco committee, denounced the vote and accused the UN agency of being a “political tool”.

“The Jewish connection to Hebron goes back thousands of years. Hebron, the birthplace of King David’s kingdom, and the Tomb of the Patriarchs, the first Jewish purchase in Israel and resting place of our forefathers – are our people’s oldest heritage sites,” he said.

“Unesco’s resolution must be rejected, and our efforts to strengthen the city of our fathers increased,” he added.

Hebron was divided between Israeli and Palestinian control under a 1997 agreement which saw Israel withdraw from 80% of the city. The Old City, and the tomb, are located in the Israeli sector.

Earlier this week, Israel protested against another resolution passed by the World Heritage Committee that referred to it as the “occupying power” in Jerusalem’s Old City, which includes sites sacred to Jews, Christians and Muslims.

The resolution kept the Old City and its historic walls on the List of World Heritage in Danger, and called on the Israeli authorities to “cease the persistent excavations, tunnelling, works and projects” that it stated were “illegal under international law”.

Mosul victory over IS within hours