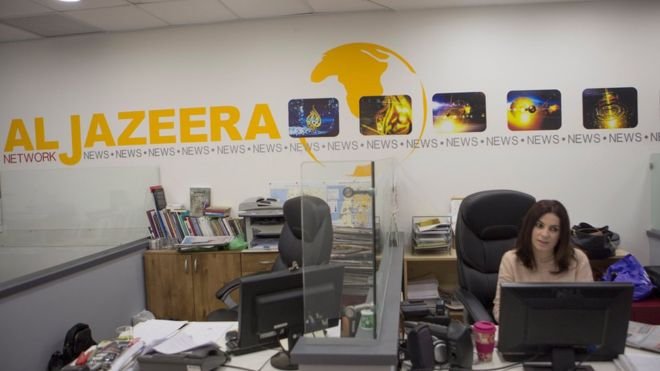 Israel is seeking to close Qatar-based broadcaster Al Jazeera’s offices in the country and revoke its journalists’ media credentials.

Communications Minister Ayoub Kara alleged that the channel supported terrorism, and said both its Arabic and English-language channels would be taken off air.

Al Jazeera has condemned the decision.

The Israeli government said it was basing its decision on a similar ban by several Sunni Arab states, amid their diplomatic rift with Qatar, which hosts and funds Al Jazeera.

Mr Kara said cable TV providers had agreed to take the network off the air, but that closing its Jerusalem bureau would need further legislation.

“Al Jazeera has become the main tool of Daesh [the Islamic State group], Hamas, Hezbollah and Iran,” he told a news conference.

Mr Netanyahu tweeted his congratulations to Mr Kara, “who on my instructions took concrete steps to end Al Jazeera’s incitement”.

An Al Jazeera official in the Qatari capital Doha told AFP that the channel “deplores this action from a state that is called the only democratic state in the Middle East, and considers what it has done is dangerous”.

Mr Netanyahu had accused the pan-Arab TV channel of fuelling a recent crisis around a holy site in Jerusalem known to Muslims as al-Haram al-Sharif and to Jews as the Temple Mount.

New security measures imposed by Israel after two policemen were killed nearby sparked protests by Palestinians, and the Israeli government eventually removed the security apparatus, which included metal detectors.

The Israeli prime minister vowed in late July to “expel Al Jazeera” for its reporting of the issue, which he said had incited violence.

The Al Jazeera official defended its coverage, saying it was “professional and objective”.

The network’s editor in Jerusalem has accused Mr Netanyahu of collusion with his autocratic Arab neighbours in an attack on free and independent media.

Al Jazeera has come under attack from several governments in the region in recent months to the concern of free press campaigners.

Saudi Arabia and Jordan both shut bureaux of the Qatari-funded broadcaster against the tiny Gulf state.

Others, including the United Arab Emirates and Bahrain, have blocked its channel and websites.

Israel’s communications ministry said on Sunday that “nearly all countries in the region… have concluded that Al Jazeera incites terrorism and religious extremism”.

The ministry added that it had become “ridiculous that the channel continued to broadcast from Israel”.

Shutting the network was on a list of 13 demands by the four Arab nations leading a boycott of Qatar that were tabled in June.

The Arabic-language news channel first launched in 1996, and shook up the media landscape in the Middle East by airing criticisms of governments and rulers in the region.

Al Jazeera says it was the first Arabic channel to feature Israeli politicians and commentators on the air.

Israel has however frequently accused it of being biased in reporting the Israel-Palestinian conflict.

New murals of Trump appear on wall between Bethlehem, Jerusalem

Rouhani warns US against ‘political suicide’