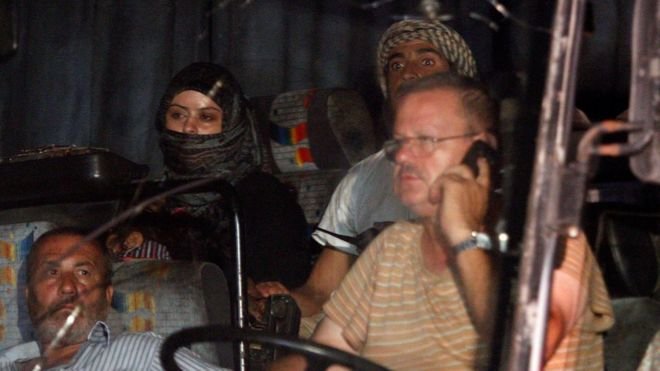 The US-led coalition says it will keep blocking a convoy of evacuated Islamic State militants in Syria from reaching IS-held territory on the Iraq border.

The hundreds of fighters recently surrendered an enclave on Syria’s border with Lebanon.

They agreed with Hezbollah and the Syrian government that they would leave with their families and head eastwards.

But the coalition says it and Iraq were not part of the deal and on Wednesday bombed the road ahead of the convoy.

The buses are now stranded in an area of desert under Syrian government control between the towns of Humayma and al-Sukhnah.

“The coalition will not condone Isis [IS] fighters moving further east to the Iraqi border,” the coalition said in a statement.

“Relocating terrorists from one place to another, for someone else to deal with, is not a lasting solution,” it added.

There are some 300 IS militants on board the convoy, described by the coalition as “experienced fighters”.

However the coalition says it has not bombed them because women and children are present.

It says it has provided food and water to the convoy and has also – via Russia – offered suggestions to Syria on possible ways of rescuing the women and children.

A tank, armed vehicles and other vehicles facilitating the relocation have, however, been targeted by coalition air strikes.

More than 300 militants and their families were allowed to leave for Albu Kamal, a town in the Syrian province of Deir al-Zour that is 6km (4 miles) from the Iraqi border.

After the deal was announced Lebanon’s army chief, Gen Joseph Aoun, said he had wanted to recover the bodies of Lebanese soldiers captured in 2014 and not risk any more lives.

But Iraqi Prime Minister Haider al-Abadi criticised it. “We fight the terrorists in Iraq. We do not send them to Syria,” he said.

Meanwhile the US envoy to the coalition, Brett McGurk, said IS militants “should be killed on the battlefield, not bussed across Syria to the Iraqi border without Iraq’s consent”.

Iraqi forces backed by US-led coalition air strikes have been battling to oust IS fighters from the towns they control in northern Iraq.

Iraq forces IS out of Nineveh province