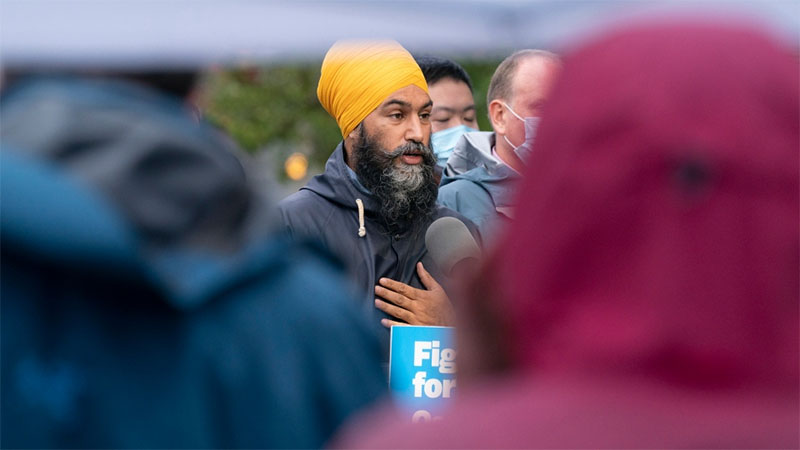 Jagmeet Singh kept hopes high during a final push for votes in British Columbia Sunday, saying New Democrats will fight for people regardless of the results of Monday’s election.

He made the pitch to hundreds of supporters in the Lower Mainland, visiting ridings held by Liberals and Conservatives that the party is hoping to swing orange.

“No matter what happens tomorrow, we are not going to waver on our commitment to put people first,” Singh said during his final address to the media in Burnaby Sunday morning.

People dressed in orange cheered loudly as they crowded the sidewalks during a later stop in the Vancouver Granville riding. The large show of support in the former riding of Jody Wilson-Raybould gave a moral boost to the party, which is tracking behind the Liberals and Conservatives.

The latest opinion polling shows another minority government seems likely, but Singh remained steadfast that he is running to be prime minister. He said Liberal Leader Justin Trudeau and Conservative Leader Erin O’Toole have teamed up in the past to make what he described as bad decisions for Canadians.

Singh said even if the election ultimately results in another minority government, the NDP will fight for people whether “it feels like Groundhog Day or not.”

“I’m looking to make government work for you,” Singh said in Burnaby with local candidates and a handful of supporters.

When asked what the key issue would be for Singh to support another party in a minority parliament, he said he’s focused on making sure billionaires pay their fair share when it comes to the cost of the COVID-19 pandemic.

The party is optimistic it will grow the 24 seats it held in the House of Commons at dissolution.

Singh said the toughest ridings for the New Democrats have been in Ontario.

“Folks are used to the cynical arguments of the Liberals,” Singh said, urging people not to buy into those ideas.

The NDP has a busy final day, with 7 stops in the metro Vancouver area. Jagmeet Singh is starting in rainy Burnaby-North, a riding the party first visited days after the election was called. Singh says he is standing with Lib turned NDP voters. “Trudeau has been all for show” pic.twitter.com/DJNZjTDwM8

John Horgan, the NDP premier of British Columbia, tweeted out support for Singh and Cowichan-Malahat-Langford incumbent Alistair MacGregor, though the premier has not appeared at an event with the NDP leader.

Campaigning during the COVID-19 pandemic has been different, Singh acknowledged, saying he missed the energy of large rallies and meeting more people in person.

But he said he’s certain his party was still able to connect with voters about their priorities: ending the housing crisis, environmental issues and Indigenous rights.

“We have been able to show Canadians a real choice in this campaign,” he said.