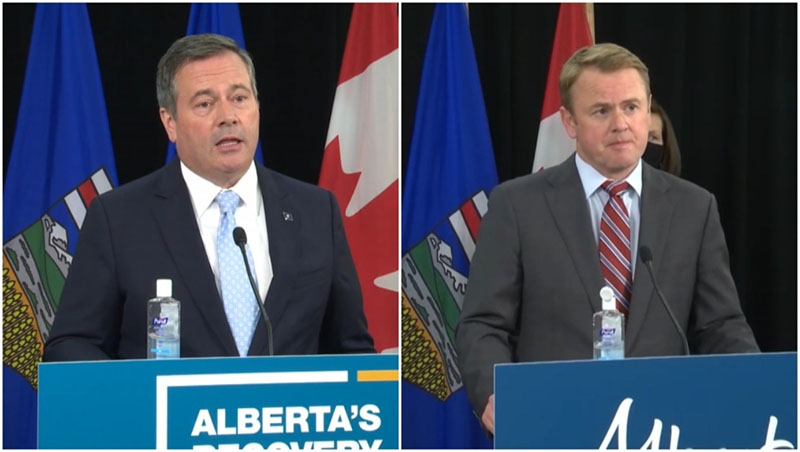 Tyler Shandro has been punted from his position as Alberta’s health minister and will now serve as the province’s labour minister.
Premier Jason Kenney switched Shandro’s portfolio with Labour Minister Jason Copping in a mid-afternoon cabinet shuffle Tuesday.

Shandro had been scheduled set to appear at a Siksika flag raising ceremony in Strathmore earlier in the day but didn’t show. His office would not answer questions on why he did not appear.

Alberta NDP leader Rachel Notley said while news of Shandro’s removal as health minister “is welcome,” it’s “not a solution to the urgent challenges before us.”

“Alberta is facing a crisis in our hospitals but the UCP can’t see beyond the chaotic spectacle of their own infighting,” the statement read.

“It is clear that the responsibility for Alberta’s pandemic mismanagement rests on the shoulders of every UCP member and therefore it is incumbent on them all to take responsibility and chart a more effective path on behalf of Albertans.

“A cabinet shuffle will not ease the immense pressure on our hospitals from this severe fourth wave. It won’t reschedule the life-saving surgeries of thousands of Albertans. It won’t recover our economy. And it won’t help everyday families looking for leadership. Albertans deserve better.”

University of Calgary political scientist John Church said he finds it surprising it took as long as it did for Shandro to be removed from the position.

He said Kenney is doing damage control and trying to appease the people who have been critical of his handling of the pandemic.

An op-ed written the UCP’s vice-president of policy Joel Mullan is calling on Kenney to resign.

“In light of the choices he has made last week, I can no longer support him, and indeed believe he must resign,” Mullan said in the piece, published by the Western Standard on Tuesday.

Mullan said Kenney’s communication has been poor and very confusing since announcing his Open for Summer plan in July.

“It is foolish not to manage expectations in an uncertain environment, yet Jason Kenney has failed to do that as a matter of course,” he said.

Mullan went on to say he had supported Kenney throughout the leadership race, but that his oath lies with the party and not its leader.

“I believe the will of the membership is clear: it is time for Jason Kenney to go,” he said.

“Members now see him — as do I — as a clear threat to the future of our movement and party.”

Church, meanwhile, said the party will be in disarray if a new leader is not chosen.

“I think that Jason Kenney is unlikely to go quietly,” he said.

“Whether or not the UCP will be able to survive beyond Jason Kenney I think is a big question mark at this point.”