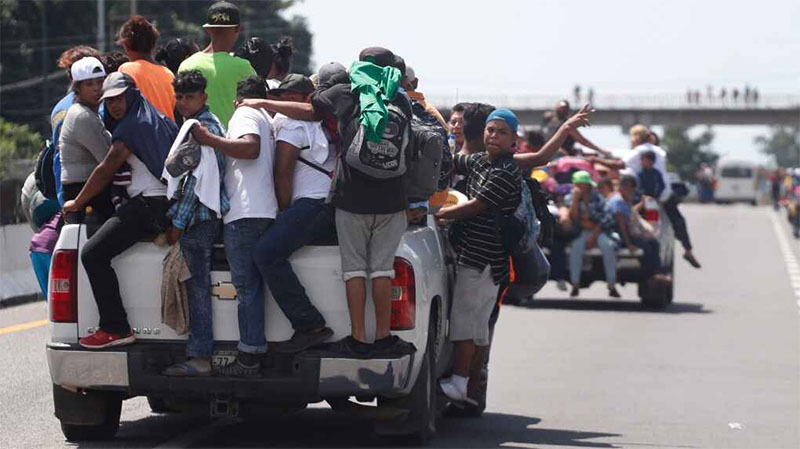 About 100 migrants who trekked on foot north from the Guatemalan border gathered in Mexico City on Saturday to mark International Migrants Day and remember fellow travellers who have died on the journey.

The migrants gathered at an improvised memorial to the victims of the 2010 massacre of 72 migrants by the Zetas drug cartel in Mexico’s northern state of Tamaulipas. The memorial is on the side of the city’s main central boulevard, near the U.S. Embassy.

The demonstrators erected a plaque that read in part “Migration is a human right.” Many in the group had walked since late October from the Mexican border city of Tapachula, after the government prevented them from hitching rides.

The group also remembered 56 migrants killed in a horrific truck crash last week in the southern state of Chiapas. The first few bodies of those victims were expected to be returned to their homeland of Guatemala over the weekend.

In a statement marking the day, a coalition of groups representing the families of Central American migrants who have disappeared in Mexico described 2021 as “a year of setbacks.”

The year started with a massacre in January that killed 19 people, including 16 Guatemalan migrants, in the northern state of Tamaulipas. Twelve state police officers face charges in those killings.

It continued with Mexican government efforts to prevent the formation of new migrant caravans, and then the Dec. 9 crash of a semi-trailer truck packed with migrants.

“These were the visible tragedies of 2021, but we must not forget the painful daily tragedies that migrants often suffer in silence: disappearances, executions, extorsion, rape, torture,” the groups wrote.

“In their rush to contain migration to the United States, the U.S. government, as well as Mexico, Honduras, Guatemala, El Salvador and other Latin American countries, are tightening up and militarizing their immigration policies, without taking into account the human cost of these measures,” the statement added.

The Mexican government has tried to appease the United States by stopping caravans of walking migrants and allowing the reinstatement of the “Remain in Mexico” policy. But Mexico has been unable to stanch the flood of migrants stuffed by the hundreds into trucks operated by smugglers who charge thousands of dollars to take them to the U.S. border — trips that all too often turn deadly.

Mexican president announces he has COVID-19 for second time